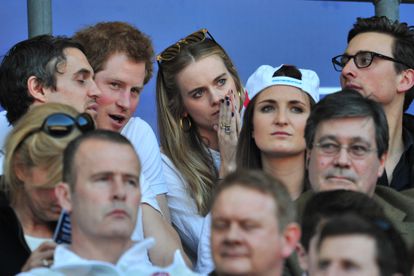 One of Prince Harry’s ex-girlfriends, Cressida Bonas recently gave a rare interview about her past relationship with the prince who has since stepped down as a senior member of the royal family with his wife, Meghan Markle.

During an interview with The Daily Telegraph, the actress and model, who dated Prince Harry from about 2012 to 2014, hinted that she had a lot of fears about joining the royal family and that those fears may have contributed to the end of her and Harry’s relationship.

She said that the whole ordeal gave her more insight into what she wants.

Cressida, who is set to star in the new biopic series, White House Farm, is set to marry her own Harry (a real estate broker) later this year after their nuptials had been postponed because of the global pandemic.

“Unfortunately it has [been delayed]. We are not quite sure what our next move is, but we will have to be postponing the wedding.”

But, Cressida, who once made headlines for dating the prince, reiterated that being labelled an “it” girl in the past, has been frustrating.

“I think terms like that are very narrow-minded. I think that I work very, very hard, I love what I do, and I just hope that this role has shown people what I can do and what I would like to do going forward and not be caught in a box in any way.”

Cressida’s comments come after Prince Harry’s other ex-girlfriend, Chelsy Davy revealed that she broke up with the prince due to Prince William and Kate Middleton’s extravagant wedding in 2011.

Chelsy struggled to deal with the royal spotlight, and it was Kate and William’s extravagant wedding that proved to her for the final time that it wasn’t the life she wanted.

According to The Mirror, royal biographer Robert Lacey explains in his book Battle of Brothers that shortly after the wedding, where Harry had been his brother’s best man, Chelsy finally ended their long romance.

“In 2011, after more comings and goings, she finally decided to go – and it was, ironically, Kate and William’s grand and glorious wedding that spring that did it for her,” Lacey wrote.