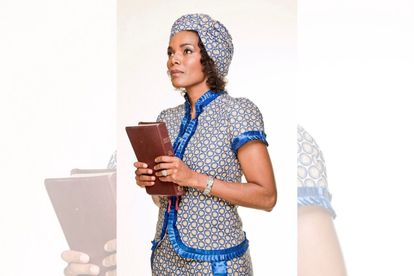 Connie Ferguson has reacted to a message from a “prophet of doom” after he warned her that her life may be in danger.

The actress was the target of Prophet Aaron Xhali who shared a bizarre message informing the star of a “warning from God”.

The video – which has gone viral – comes seven months after the death of Connie’s husband Shona Ferguson.

Prophet Aaron Xhali of I Am Ministries located in Rustenburg, conveyed his prophecy to Connie Ferguson through his Twitter account over the weekend.

In it, he claims he was delivering a divine message to the star. He also hinted that Shona Ferguson’s death was as a result of Connie Ferguson not taking the message seriously.

He said: “I’m sending a message and this is a warning from God. The first one was not taken seriously. I know you have lost your husband Connie Ferguson. This message was given ten months back to save the life of your loved one”.

The prophet – also known for his anti-vax messages – then claimed to “see cancer developing” for Connie Ferguson.

He added: “I have another message for you from Jesus. I see cancer in the left sides, inside your breasts…I’m seeing cancer developing. It’s still a very small molecule, but it is building up. That is why from time to time, you will feel a pain, under your ribs, under your left breast.

“Jesus is giving you a chance to escape that trap and to surrender to him”.

Claiming that he had fulfilled his duty as a man of God, the prophet added: “I’ve done my job”.

Whilst Connie Ferguson did not address the message directly, she did seemingly hint at it in an angry tweet.

“So triggered”, she posted with a series of angry face emojis.

Connie Ferguson’s eldest daughter Lesedi Matsunyane-Ferguson did not mince words and took aim at the pastor in her own social media post.

She responded to his message, tweeting: “We pay attention to God, alright. For a ‘man of God’ you have very malicious intentions by using my family as clickbait. If your heart is as pure as what your calling REQUIRES you to be, you’d have found ANY OTHER WAY to deliver whatever message DIRECTLY”.

South Africans also reacted to the video, with many sharing similar views to Lesedi.

Some claimed that the prophet should have shared his message privately with Connie Ferguson, whilst others accused the pastor of “clout-chasing” on the family’s pain.

“He could have contacted Connie Ferguson.  A prophecy should be between the prophet & the recipient”

“As a prophet, you should know that the spiritual realm is not a platform to show off. .A gift of prophecy is not a token of making followers or popularity for yourself! As you know, God never embarrasses widows or orphans, he protects them”

“If you really had a word for her, why didn’t you confront her then advertise it to the public. You are using a celebrity to market yourself to the masses. May the judgement of God be upon you”