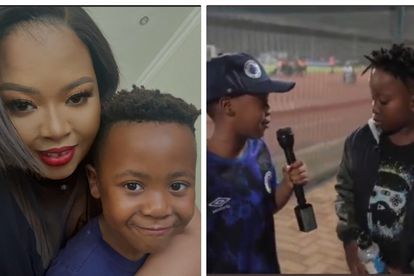 Anele’s seven-year-old son, Alakhe, seems to have chosen his favourite soccer club and it’s not Kaizer Chiefs or Orlando Pirates. Images via @zintathu/Instagram

Anele’s seven-year-old son, Alakhe, seems to have chosen his favourite soccer club and it’s not Kaizer Chiefs or Orlando Pirates. Images via @zintathu/Instagram

Anele Mdoda’s son, Alakhe, is fast becoming a media personality (especially in the sporting department) and tweeps are here for it.

The bubbly seven-year-old showed off his commentary skills on Sunday 30 October during a match in the Premiere Soccer League (PSL) between SuperSport United and Swallows FC at the Lucas Masterpieces Moripe Stadium in Pretoria.

IS ALAKHE A SUPERSPORT UNITED SUPPORTER?

Anele’s fans have been getting titbits into Alakhe’s sporting world with his YouTube channel, Alakhe’s World.

Besides his love for Formula One, he is also passionate about foootball and with his latest commentary skills, fans now know which PSL club he supports… that’s if he sticks to it.

During the match between Matsatsantsa a Pitori and the Dube Birds, Alakhe — who was sporting a SuperSport United jersey — was heard reacting to a goal scoring opportunity for Swallows, saying he hopes they did not score.

In a funny and adorable clip shared by the 947 breakfast host, Alakhe asks his friend about his analysis on the SuperSport side. In response, his friend says the club needs to improve because if it does not, “they” are going to lose.

Alakhe, who completely agrees with his friend, then looks over to the pitch as Maswaiswai miss a scoring chance.

“Okay! I am glad that is NOT a goal,” Alakhe quipps.

Sadly for little boys, the match ended in a one-all draw.

“Guys… Alakhe is the most biased commentator ever !!!! Ever !!!” Anele captioned the post.

Alakhe received a lot of praise from the Twitter streets for his commentary skills, however, Orlando Pirates fans were disappointed that he is not one of them.

“Something is bothering me, Alakhe belongs to Orlando Pirates,” said one fan. While another wrote: “I thought he is a Buccaneer nje.”

“His Voice and tone has already won him a spot on [sic] commentators,” said one other tweep.