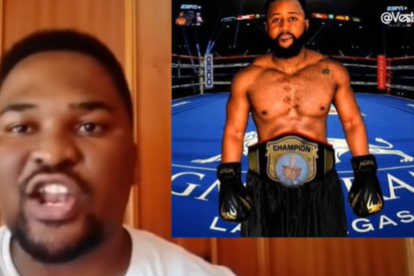 Cassper Nyovest is slowly building himself a reputation of challenging peeps to boxing matches – and then backing out. The latest to get challenged by the rapper is YouTuber Slik Talk. Cassper challenged the mouthy content creator Slik Talk and offered to give him R100k if he lasts at least three rounds.

Now Cassper seems to be backing down because Nota Baloyi is involved.

Cassper Nyovest and Slik Talk have been butting heads ever since the YouTuber criticised the rapper’s presenting skills and alcohol brand. In a viral clip, Slik Talk accuses the Baby Girl singer of releasing a “weak product.”

After spotting the clip, Cassper offered Slik R100k to get into a boxing ring, and surprisingly, Slik Talk agreed. In a bizarre clip, he shares how knocking the hip-hop star out would make him the happiest man alive.

The exchange got a lot of attention from tweeps who are seemingly excited to witness the showdown.

It may not happen though…

This would not be the first time Cass promised his fans a boxing match and then backed out. The star once again seems to be backing out of the deal and this time his excuse is that entertainment manager Nota Baloyi is involved.

Slik Talk announced that he will not be communicating directly with Cassper about the boxing match adding that Nota will be representing him. To this Cassper responded:

“With Nota involved, I don’t see this happening anymore. They are gonna mind all the excuses in the world, demand crazy things just to make it impossible to happen, and just keep making noise.

Fans see through the excuses

“Mxm so you’re telling us out of all these fights you’ve been planning, it’s always the other guys that are running? You’re the one looking like you’re coming with excuses here before the other party’s said a word.”

“Why are you always the one making excuses first?”