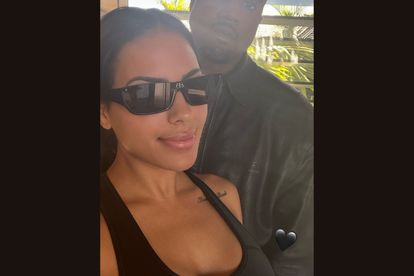 Kanye West is rumoured to be datign Chaney Jones. Image via Instagram @chaneyjonesssss.

Kanye West is rumoured to be datign Chaney Jones. Image via Instagram @chaneyjonesssss.

American rapper Kanye West fueled dating rumours with Chaney Jones – a woman who closely resembles his estranged wife Kim Kardashian – after she posted a selfie with the Gold Digger hitmaker on Monday 28 February.

Chaney Jones, a 24-year-old woman who closely resembles Kim Kardashian posted a selfie with Kanye West fueling dating rumours. Kanye appears to have his hand around the 24-year-old, who added a single black heart to the selfie. Take a look…

Kanye and Chaney first made headlines in February when she attended his Donda 2 listening party is Malibu, California.

This comes just two weeks after the rapper split from his short term girlfriend Julia Fox. Kanye may be over his romance with Julia but he sent Kim a truck full of roses for Valentine’s Day on 14 February. Kim has since begged a judge to sign her divorce papers because the rapper’s social media posts have caused emotional distress.

“I very much desire to be divorced. Kanye has been putting a lot of misinformation regarding our private matters and co-parenting on social media, which has created emotional distress,” said Kim according to Page Six.

WHO IS CHANEY JONES?

Chaney is a social media influencer and model but she is also the Chief Operating Officer (COO) of First State Behavioral Health, a counseling company started by her father, Avon, who is the CEO.

The 24-year-old graduated from University of Delaware in 2020 where she majored in elementary education and minored in human development and family studies, according to The Sun. She is pursuing her Master’s degree in counselling at the Wilmington University in Delaware, US.

“Reminiscing on college graduation. So excited to share that I will be going back to school to get my masters degree! I love pushing myself and striving for greatness. Stay tuned for degree #2 ????????‍????????,” she captioned an Instagram post.

The Masters student has 280 000 Instagram followers and loves to travel.