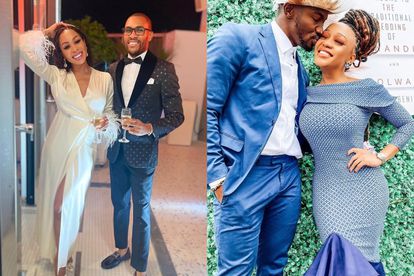 Thando Thabethe and Lunga Shabalala, along with Khanyi Mbau and Kudzai Mushonga, kissed and made up this year. Images via Instagram @mbaureloaded @lunga_shabalala.

Thando Thabethe and Lunga Shabalala, along with Khanyi Mbau and Kudzai Mushonga, kissed and made up this year. Images via Instagram @mbaureloaded @lunga_shabalala.

American singer Jennifer Lopez and actor Ben Affleck rekindled their love this year after calling off their engagement in 2004. This seems to have sparked a “Bennifer” effect among celebrities who also decided to give love a second chance!

Actress Thando Thabethe and actor Lunga Shabalala were back in each other’s arms this year after going their separate ways in 2020. The pair were rumoured to be dating in 2019 when they were spotted on baecation together in the Maldives.

Thando shared a snap with Lunga in August captioned, “love you”.

Khanyi Mbau made headlines at the end of August when her businessman boyfriend Kudzai Mushonga claimed she was missing in Dubai.

Kudzai said he left Khanyi at the salon and she did not return for hours so he went looking for her. He shared Stories on Instagram while trying to track her down which led Tweeps to think she was actually missing.

Khanyi was actually on a flight back to South Africa without telling Kudzai. She said that she was giving him time to think so the pair were on a break. Khanyi refilled her money bag while in Mzansi and then headed back to her soft life in Dubai with Kudzai…

Blood & Water star Natasha Thahane and Orlando Pirates player Thembinkosi Lorch have been dribbling the nation with alleged breakups and makeups. The pair was first spotted together by the “Twitter Police” in July when they were on a baecation in Zanzibar.

However, when the pair removed their photos of each other on Instagram in August, many believed they had broken up. Natasha and Lorch then posted Instagram Stories proving they were still very much together.

The pair were back to their antics again in September when they unfollowed each other on Instagram and posted cryptic quotes. That did not last long as Lorch gifted Natasha “something special” for her birthday on 25 September.

ARE DJ BLACK COFFEE AND ENHLE MBALI BACL TOGETHER?

Controversial podcast host MacG hinted that DJ Black Coffee and Enhle Mbali rekindled their love on an episode of Podcast And Chill on 13 December.

“I hate talking about couples…I mean look what happened to Enhle and Black Coffee. She came out talking about GBV, he is not paying electricity, now they are back together,” said MacG.

However, Enhle Mbali denied the rumours.

“I’m still very single… Not back anywhere. Still my own person. Someone’s getting paid to lie,” she wrote in an Instagram Story.