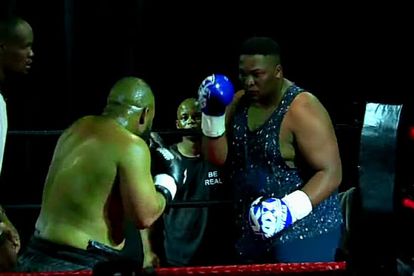 The “Fame vs Clout” boxing match that most people doubted would even happen, has finally come and gone! Rapper Cassper Nyovest is probably feeling good about himself after emerging victorious in his much-anticipated fight against controversial YouTuber Slik Talk.

The action, or lack thereof in this case, was livestreamed on Wednesday evening 22 December just after 21:00. Thousands of fans tuned in to catch Cassper and Slik Talk exchange blows in the ring after months of juvenile banter between the two.

Cassper vs Slik Talk: How it all started

Cassper Nyovest challenged Slik Talk to the boxing fight after he trashed the rapper — as he usually does with most celebrities — on his YouTube channel.

Unlike many of his industry peers who usually ignore the attacks, the rapper refused to take the matter lying down. Cassper has been known to ask challenge people to boxing matches, including fellow rapper AKA and musician Prince Kaybee, but none of the matches ever became a reality in the ring.

BLOW BY BLOW: CASSPER NYOVEST AND SLIK TALK IN THE RING

If you were expecting the mother of all showdowns with Cassper Nyovest’s “Fame vs Clout” boxing match against Slik Talk, you’ve probably been left disappointed. The entire fight (breaks included) took just under 12 minutes!

Cassper managed to prove to both his fans and critics that he wasn’t just talk after all when he took down Slik Talk during their fight. The Doc Shebeleza hitmaker landed a number of punches on his opponent, something which both the referee and boxing announcer took note of.

By the second round, the impact of Cassper’s punches were clearly visible on Slik Talk’s face. After more than a minute and 30 seconds into the third and final round, Cassper was declared the winner of the fight via a technical knockout.

Unfortunately for Silk Talk, he’s not so tough in the boxing ring as he is when he rips celebrities to shreds on his podcast…

Their fight was at the top of the trends’ list on Twitter. Some of the users of the social media platform have praised the YouTuber for not chickening out and pitching up for the event. Regardless of the results, Slik Talk is no loser here – he gets to walk away with a whopping R100 000 from the fight.

“The referee in charge of this contest saw too many punches going to the head and as a result, the boxer called Slik Talk too much punishment… Therefore the referee had no alternative but to stop this contest… And your winner via KO is Iron Man, Cassper Nyovest”