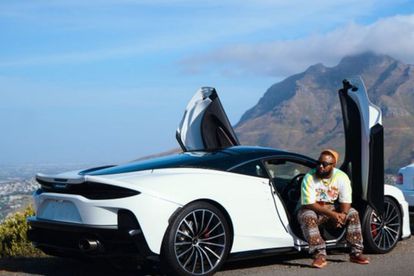 Whilst the star has bragged about being the only person in South Africa to own the super car, many think he is merely paying lip service.

A number of tweeps – including entertainment commentator Nota Baloyi – claim Cassper has either been paid to endorse McLaren, similarly to other stars in Mzansi.

Now a luxury car hire service has gone viral after claiming they rented out the sports car to the star.

The account posted an image of the white McLaren with the words “currently rented out to @casspernyovest”.

In a separate post, the company alleges Cassper is “ enjoying the benefits of long term rentals option from us”.

But Cassper has rubbished the claims, inisting the company and their claims are scams trying to tarnish his name.

Responding to a tweep who posted the picture online, Cass replied: “Lmao… You would really be an idiot to believe this rubbish…. I really hope they successfully scam people so I can laugh at them properly for believing such a clear scam.

“A car hiring company without a website, a phone number or an email. How do you reach them as a customer?”

“Anyone with a brain can see that thing is a scam”, he added.

WHO ARE LUXURY CAR RENTALS?

According to their IG bio, the company’s offices are based at 74 Victoria Road in Camps Bay, Cape Town.

Their posts also reveal that they offer various luxury cars at daily prices of R5000 per day and upwards. They also reportedly offer a zero deposit car licensing fee

However many tweeps claim the company is nothing more than a scam and are using Cassper Nyovest’s name to clout chase.