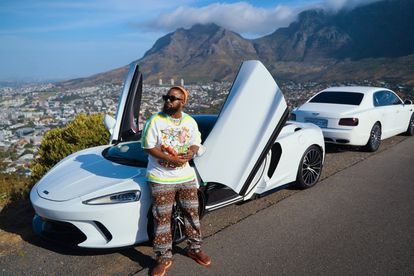 Cassper and his McLaren in Cape Town
Image via Instagram
@casspernyovest

Cassper and his McLaren in Cape Town
Image via Instagram
@casspernyovest

Cassper Nyovest is currently living it up in Cape Town – and joining him are two flashy rides from his fleet of luxury cars; a McLaren and a Bentley.

The rapper and businessman revealed on social media that he transported his beloved cars via truck to the Mother City, where he will be spending the next few days.

He tweeted: “I’ve always had this dream of going on holiday & shipping my dream cars to Cape Town or Durban. I’m about to live out that dream.

“Rented a dope crib with the boys, trucked down a couple of my cars to Cape Town for the week, Billiato cases on deck! Content bout to be lit on the gram!”

And not only is Cass’s dream has become a reality, but his pics are dope too!

Cassper Nyovest revealed in a video that his McLaren and Bentley were parked at waiting for him at the Cape Town airport.

He also shared a peak at the luxury villa he had rented in the city.

Of course, the McLaren had to make an appearance at Cape Town’s equally trendy nightlife. Cassper drove the car to the Ayepyep lifestyle lounge in the city, which is home to many celebs.

The R3m supercar also made a stop touring the picturesque scenery.

Cassper and his McLaren also met up with a host of celeb pals in Cape Town including Pearl Thusi, Thuli Phongola, Sarah Langa and Kabza Langa and many more!