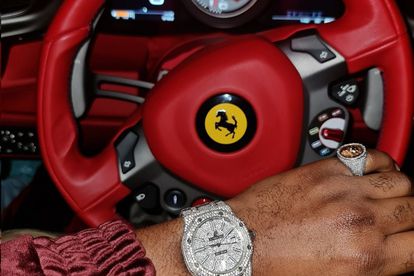 Cassper Nyovest is still about that McLaren life…but now it seems he may have been seduced by another supercar; a Ferrari

This, after he teased a picture of him behind the wheel of the flashy red ride.

The rapper posted a pic of what appeared to be his blinged-out hand cradling the steering wheel of a Ferrari.

The Billiato boss captioned the pic with several hashtags including: “#MotivationMondays #488 #488nlargo #Ferrari”.

According to Autotrader, a Ferrari 488 model is valued between R5 million -R10 million.

And whilst Cassper has had to fight off speculation that he is the actual owner of a McLaren GT, fans are even more puzzled at the star’s social media pic.

“Are you buying a Ferrari Cass?” asked on tweep, whilst another commented: “How many cars do you have now bro?”

But fans have speculated that the Ferrari actually belongs to Cassper’s good friend and Drip Footwear founder Lekau Sehoana.

Lekau borrowed Cassper’s McLaren over the weekend, but hilariously returned it after complaining about the price of petrol.

CASSPER FLAUNTS HIS CRIB AND CARS

Meanwhile Cassper Nyovest has breathed fire on his critics after posting a picture of his assets.

This includes his Johannesburg mansion and three supercars; a McLaren, a Bentley, a Mercedes and a Rolls Royce.

In the pic, Cassper is seen standing on the roof of his stately home. He captions the post: “My life was never eazy”.