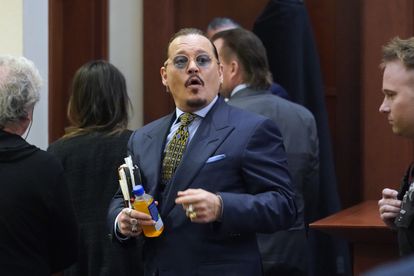 Fans of actor and musician Johnny Depp have been rooting for him to be romantically involved with his lawyer, and according to the Daily Mail, the Pirates Of The Caribbean star has listened.

Well, he listened to the lawyer part, as he is said to be dating his Attorney Joelle Rich, who was on his legal team during his lawsuit against UK publication The Sun, which he lost in November 2020.

DEPP AND RICH’S RELATIONSHIP WAS GROWING STRONG DURING HIS TRIAL

During his defamation trial against his ex-wife Amber Heard from April to late May this year, Depp was rumoured to be dating his lawyer, Camille Vasquez. However, sources close to the legal expert poured cold water on the allegations when they revealed that Vasquez is in a serious relationship with a British man in real estate.

The Daily Mail reports that while fans were excited about a possible relationship between the 59-year-old actor and Vasquez, it was Rich that he was actually in a relationship.

Although Rich, 37, was not on Depp’s legal team during his six-week trial this year — which he won in June — sources reveal that she publically supported him at the Fairfax County Court in Virginia.

Every day after court, Rich and Depp were seen leaving court together in the Let It Be Me singer’s SUV, sources claim. The couple were reportedly living together in Virginia for the duration of the trial to make it easier for the actor to get to court.

ALSO READ: Order in court: Is Johnny Depp ‘flirting’ with one of his lawyers?! [watch]

‘THEIR RELATIONSHIP IS OFF THE CHARTS’

According to another source, Depp and Rich’s relationship is “the real deal,” US Weekly reports.

“Their chemistry is off the charts. It’s serious between them. They are the real deal,” said the source.

In addition, the source said that Rich’s presence at Depp’s trial in Virginia was purely personal as she was there in support of her man.

WHO IS ATTORNEY JOELLE RICH?

Rich is said to be a wealthy London-based lawyer who is a partner in the international law firm Schillings whose clients include Prince Harry and his wife Meghan Markle.

A mom-of-two, the lawyer is said to be separated from her husband Jonathan Rich, who is in finance. The couple is also said to be getting divorced.

According to her bio on the Schillings website, Rich “helps individuals and families in the public eye protect their privacy and reputations” and has “expertise in libel, privacy and copyright disputes.”