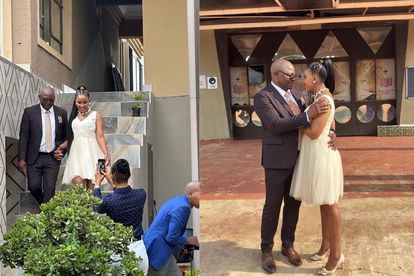 Newlyweds Brutus Malada — a member of ActionSA — and Johannesburg mayor Mpho Phalatse had their private wedding at the weekend exposed when a woman who claimed to be Malada’s fiancée blasted him.

Speaking to TshisaLIVE about his nuptials and the cheating allegations, the politician said he is a happy man.

In an interview with SowetanLIVE, a woman who claimed to be Malada’s fiancée said that she was shocked when her friends sent her pictures of him tying the knot with the Joburg mayor, who is member of the Democratic Alliance (DA).

“I still love Brutus but I feel he should have handled things differently. There is nothing wrong about growing out of love. They both disrespected my family and me when they decided to get married without doing things the right way,” said the businesswoman whose name is Ntaka Tshifaro.

The woman claimed that although she had vacated their home in Sandton when there was trouble in paradise, she was still Malada’s partner.

“Brutus paid lobola to my parents and uncles and he should have taken me back to my parents if the marriage was no longer working. When I received the photos on Saturday, I was shocked but it provided answers to a lot that was happening to our marriage since the beginning of the year,” she added.

‘I’M HAPPY I FOUND MY SOULMATE’

However, Malada has a different version of how the “lobolo” went down as he said he only paid R5 000 for ivula mlomo (icebreaker between families of the bride and groom to-be).

Asked about his marriage, Malada said: “I have no comment. I just want to say I’m happy I found my soul mate.”