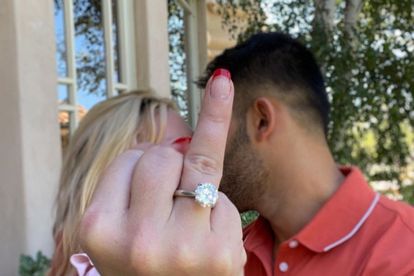 American singer Britney Spears officially tied the knot with her fiancé Sam Asghari in an intimate wedding on Thursday 9 June.

Britney Spears married her fiance Sam Asghari in an intimate ceremony on Thursday 10 June. The wedding guests included Drew Barrymore, Paris Hilton and her mom Kathy as well as Madonna.

People reports that the Toxic hitmaker wore a Versace dress and walked down the aisle to Elvis Prelsey’s Can’t Help Falling In Love.

“I am very ecstatic this day has come, and they are married. I know he wanted this for so long. He is so caring and supportive every step of the way,” Asghari’s manager, Brandon Cohen said to People.

“I am so grateful to have Sam in my life and can’t wait for the future they will build together,” he continued.

The wedding comes just after the singer miscarried her baby early in the pregnancy.

ALSO READ: Who is the ‘cute a-hole’ at Britney’s side? Here’s what we know

THE SINGER HAS BEEN WEDDING PLANNING FOR THE LAST NINE MONTHS

Britney has reportedly been planning the big day for nine months.

“Britney started planning and dreaming about her wedding shortly after she got engaged in November,” said an insider according to the publication.

“It’s a huge deal to her that she is finally able to get married. She wants it to be perfect,” the insider continued.

The singer’s sons Sean Preston and Jayden James did not attend the wedding and neither did the rest of her family. Britney’s ex-husband Jason Alexander, who she was married to for just under 55 hours in 2004 attempted to crash the wedding.