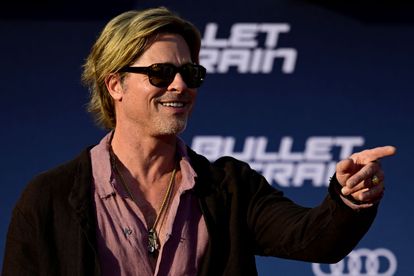 Hollywood star Brad Pitt has contacted Martin Brundle to explain why he snubbed his interview on the grid at the United States Grand Prix. Image: John MACDOUGALL/ AFP

Hollywood star Brad Pitt has contacted Martin Brundle to explain why he snubbed his interview on the grid at the United States Grand Prix. Image: John MACDOUGALL/ AFP

Oscar-winning Hollywood actor Brad Pitt caused quite a stir on the red carpet rocking a gender-bending skirt at the German premiere of Bullet Train on 19 July. For Pitt this was not only a U-turn from conventional men’s fashion, but also a radical departure from his recent GQ cover shoot which drew criticism.

Okay, we’re not talking Mzansi designer Rich Mnisi’s “eina” miniskirts for men here, although Pitt has pulled those off in his role as Achilles in his 2004 blockbuster, Troy.

His designer Haans Nicholas Mott brown linen knee-length skirt — paired with a mauve shirt, matching brown jacket and black combat boots — gave fans a rare glimpse of his leg tattoos which include the face of a rhino and a human skull.

Why Brad Pitt slipped into a midi skirt…

According to Sky News, the 58-year-old Fight Club actor gave the following casual reply to a reporter’s question about why he opted to skirt the norm for men’s fashion:

“I’m going to say, it’s all about the breeze, the breeze is very nice…very, very nice.”

And with the sweltering heatwave Europe has been experiencing recently, easy-breezy definitely does it…For Pitt and his fans, who tweeted their appreciation.

“Just when you think Brad Pitt couldn’t get sexier, he wears a skirt,” wrote one Twitter user.

Another tweep reacted by praising the actor for “normalising” men wearing skirts.

Pitt joins the likes of Harry Styles, Oscar Isaac, Billy Porter, Jared Leto, Timothee Chalamet and Jaden Smith who have been swirling around in skirts and dresses.

But it is a fresh breeze to see an affirmed, bona-fide Hollywood superstar in his 50s embarking on such a bold fashion statement.

Has Harry Styles been Brad Pitting it all along?

As far back as 2006, the actor was not shy to frolick around in dresses on several Rolling Stone covers. So, Harry Styles might have been the one “Brad Pitting” it all along! Take a look…

Quoted in British Vogue upon the 2004 release of Troy, Brad skirted the issue of fashion trends by predicting that skirts will become the mainstay of men’s wardrobes the next season:

“Men will be wearing skirts by next summer,” he told reporters at the film’s world premiere in Berlin at the time.

“That’s my prediction and proclamation. The film answers to both genders. We were going for realism and Greeks wore skirts all the time then.”

In the fast-paced action movie Bullet Train, Pitt plays Ladybug, an unlucky assassin whose first job after an extended period away in therapy goes spectacularly wrong.

“For an assassin it’s a real conflict of interest,” he told Sky News.

“He is working on his mindfulness, it’s not going so well.”

It is scheduled for theatrical release in August.