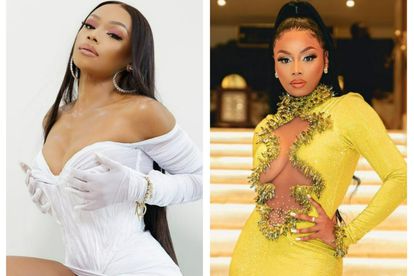 Bonang Matheba is rumoured to be expecting a bundle of joy. Images via Instagram: @bonang_m

Bonang Matheba is rumoured to be expecting a bundle of joy. Images via Instagram: @bonang_m

Media personality Bonang Matheba has shot down reports she is expecting a bundle of joy, saying a ‘bump’ was merely the result of a bad camera angle.

This follows after her cousin Pinky Girl posted a snap of the two of them – and Bonang’s stomach appeared to have a little bump.

According to Zimoja, Bonang said that she had just had a tequila when the picture was taken from a bad angle.

She said she was just out having fun with friends at a restaurant.

The businesswoman said: “I’m not pregnant Bathong! I just had a tequila for crying out loud!”

The publication also reports that a source says Bonang has a lot happening for her at the moment and the last thing she needs is to be pregnant.

“She is super busy this time of the year, people are happy there are too many celebrations happening around and she has many appearances to make, I don’t think having a child is an option,” says the source.

ALSO READ: ‘She is the best of her time’: Andile Ncube sings Bonang’s praises

QUEEN BEE NOT PLANNING TO SETTLE DOWN

A friend added that Bonang will only have a child later in life because she is currently busy.

However, the source also told Zimoja that even tough Queen B has been linked to one of the popular DJs, she is not planning on settling down anytime soon.

“[Queen Bee] is self sufficient and wants to be on top of her game all the time, She is well travelled and too ambitious and her brand is still relevant. She will probably have a child or children later in her life just like the likes of Naomi Campbell and other successful women,” reported the publication.

ALSO READ: ‘Love of my life’: Who is Bonang Matheba’s mystery man?