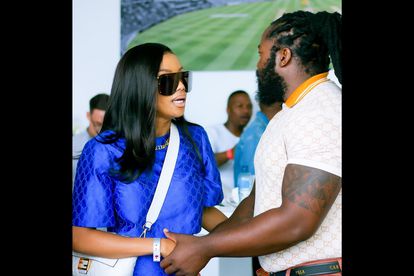 Queen B and Big Zulu have sparked romance rumours after a video of the pair went viral on Twitter. The pair were seen holding hands and having a conversation full of smiles and laughter. So, take a look…

She later retweeted the video with a caption about zulu men sweeping you off your feet.

“A Zulu man will sweep you off your feet. Stay vigilant,” read the tweet.

Bonang also teased her 5.1 million followers with hints of a budding romance but did not reveal who he is. Just a day before Valentine’s Day Queen B took to Twitter to let her followers know they should spoil the ones they love. So, one of her followers questioned her about where her boyfriend is and she responded saying he was next to her. So, take a look…

“…Where is your boyfriend?” asked @ThabisoMakhele.

So, Tweeps are convinced her boyfriend is Big Zulu.

TWEEPS: ‘I WANT BONANG AND BIG ZULU TO GET MARRIED TOMORROW MORNING’

Twitter users are keeping an eye on Queen B and Big Zulu because they seem to love them together. So, take a look…

“I don’t know what Big Zulu said to Bonang but I understand her reaction😭😭😭😭Zulu men will do you like that with that thing they do when they shela you.. Calling you by their clan names etc,” tweeted @ManCityGworl.

“Am I crazy???🤔why do I want @BigZulu_ZN and @Bonang to get married tomorrow morning and have 3 beautiful kids together?? They look amazing hle!!!” tweeted @thwala_thabsile.