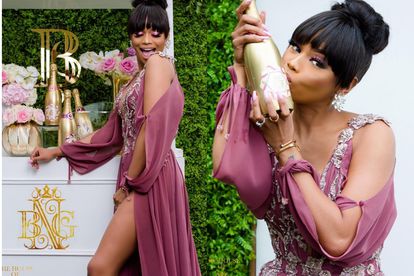 Media personality Bonang Matheba crashed Twitter Spaces with her audio stream last week when she announced that she had terminated her contract with her management company on 12 October.

This was reportedly because her management company “muscled her out of” her sparkling wine brand House of BNG.

The media personality who relocated to New York earlier this year, had over 16 000 people tuned in to her Twitter Spaces audio stream including fellow media personality’s Sizwe Dhlomo, Lasizwe Dambuza and also fast food outlet KFC. Her big announcement was that she has parted ways with her management company. She accused the company of “unsavoury behaviour”.

“So over the last few years, I have been in a business relationship with a management group to represent my brand. I put my trust in them and gave them stewardship over brand Bonang to build and support it across all mediums including entertainment, fashion, and entrepreneurship,”she said.

“Today I announce that I have terminated the contract with them and they no longer represent me, or any of my business ventures,” she continued.

CSA GLOBAL FIRES BACK AT BONANG

Although she did not mention names, communications company Celebrity Services Africa (CSA) Global fired back at Bonang’s claims saying that she was in breach of several contracts.

“For the record, @Bonang Ms Matheba is currently in breach of multiple contracts with various clients as she has been derelict to these brands and indeed her own for the past six months,” said CSA Global in a statement.

Sunday Times reported that the fight between Bonang and CSA global over her sparkling wine brand, House of BNG. The publication reported that her camp claims she was muscled out of House of BNG by her former agency. CSA Global allegedly negotiated directly with House of BNG and cut the media personality out as a shareholder.

House of BNG was the official celebration partner of Miss South Africa 2021, which was won by 24-year-old Lalela Mswane.

In an interview with Tshisa Live, Bonang revealed the red flags to look out for when working with agencies.

“Remember that an ‘agency’ enables you and your business and represents your interests. They ‘do not own you’ and ‘you do not work for them’. Guard against their attitude or posture or intentions of superiority and disrespect and condescending stances. Act swiftly to correct that,” she said.

“Make sure that agency bosses don’t want to compete with you in public spaces for appearances and also that agency does not insert themselves in your business beyond the agency agreement which is about them acting in your interest as their client,” she continued.

In response, CSA Global told Tshisa Live that they are not in the business of destroying brands.

ALSO READ: ‘Finna give him some babies’: Another big announcement from Bonang