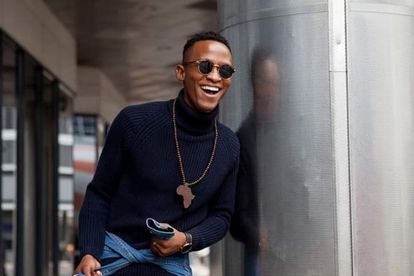 A friend of television presenter Katlego Maboe made shocking allegations regarding his cheating scandal and relationship with Monique Muller via a thread of tweets on Tuesday 2 November.

A year after Katlego’s cheating scandal which took a toll on his career, his friend has spoken out about the nature of his relationship with the mother of his child, Monique Muller.

The friend of Katlego goes by the Twitter handle @MximYesess. His real name is not displayed on his social media accounts but he does have pictures with and off Katlego on social media.

@MximYesess says he is the former sports producer of Expresso Show. He also says that he has previously lived with Katlego.

“Here is the TRUTH, from my perspective, of the Katlego Maboe story. For context, I am one of Katlego’s closest friends. Have lived with him. Traveling with him. I was in Ukraine on the night where his infidelity occurred. I was there when his relationship started,” he wrote on Twitter.

The allegations he made over the thread of tweets are alarming. Here are four bombshells from @MximYesess.

The former sports producer claimed that Katlego feared his partner. There was a time when they went out and he constantly looked over his shoulder because his partner threatened to fly to Johannesburg and show up where he was.

For this reason, the friend was not happy for him when he found out Katlego and Monique were expecting a child together in 2018.

2. HE CLAIMS THERE WAS NO STI

He claims that because there were no antibodies in Katlego’s system, he never actually carried a Sexually Transmitted Infection (STI).

“With our Covid-19 knowledge of how to test for a virus, we know that doctors look for antibodies to show the presence of said virus. There were no antibodies in Kat’s system. Which indicates that in all likelihood, he never carried an/the STI,” he wrote on Twitter.

3. MONIQUE ALLEGEDLY THREATENED TO LEAVE WITH THEIR UNBORN CHILD IF HE GOES TO UKRAINE

In 2018, they were both in Ukraine for the UCL final and @MximYesess needed accommodation. Katlego eventually let him stay with him. When his friend questioned what the big deal about sharing his accommodation was, Katlego allegedly revealed that Monique threatened to leave with their unborn child if he got on the plane to Ukraine.

This was because she thought there was something between the former Expresso Show presenter and his colleague Zoe Brown.

He allegedly swapped seats to avoid sitting next to Zoe and declined group photos out of fear. He was said to have also been suspicious that his conversations were being monitored.

The former sports producer also claimed that Katlego was not in violation of the contract limitations but he was just late on paying maintenance by one day.