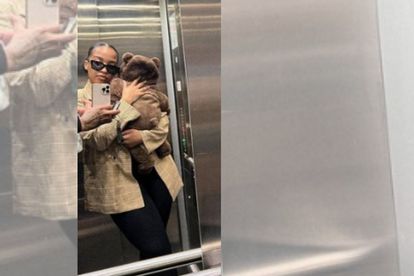 Award-winning actress Cindy Mahlangu has shared a pictures of herself holding her baby inside an elevator while her soccer star baby-daddy Bongani Zungu is taking the photo.

The former The Queen actress Cindy Mahlangu also shared pictures of her baby with the talented soccer star Bongani Zungu on her Instagram stories.

She shared a video of her baby undergoing swimming lessons after entertainment blogger Musa Khawula revealed in April that the actress welcomed her bundle of joy.

Viewers of The Queen also revealed that the actress exited the telenovela back in November as she was rumoured to be pregnant.

The news of her resignation was announced by Phil Mphela a day after he announced MultiChoice fired her co-star – SK Khoza – who plays the role of Shaka Khoza on the show.

She played the role of Siyanda from seasons three to six as Kagiso Khoza’s (Loyiso McDonald) girlfriend.

She also resigned from the Mzansi Magic telenovela in June 2020 after she joined e.tv’s Scandal! to play the role of Violetta Mamba.

HER RELATIONSHIP WITH BONGANI ZUNGU

The couple confirmed their relationship back in August 2020 when a video of them kissing went viral.

Zungu and Mahlangu also made headlines in 2021 when it was alleged that the footballer was cheating on her.

This came after a picture was widely circulated on social media of him kissing an unknown woman on the cheek at a party while on loan to the Scottish club Rangers.

The soccer star was one of five Rangers players fined by Scottish police “for attending an illegal gathering of 10 people in a flat” in breach of lockdown rules during the COVID-19 pandemic in the United Kingdom.

Zungu was also accused of cheating on his former fiancée – Khanyi Cele – with Cindy Mahlangu in a video months before they revealed they were an item.