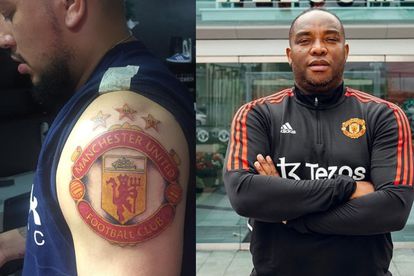 Mzansi soccer legend Benni McCarthy has been praised by South Africans after joining one of England’s top football clubs, Manchester United, as a striker’s coach. Hip-hop star AKA, who is a big fan of the football club, gushed over McCarthy’s appointment in a touching Instagram post.

After leaving his post as the head coach of AmaZulu F.C in March, Benni McCarthy officially joined Manchester United on Saturday 30 July. The former football player will specialise in coaching attacking plays and positioning.

McCarthy was once a fan of Manchester United and played against the “red devils” for Porto in the 2003/04 Champions League.

AKA GUSHES OVER BENNI MCCARTHY

Taking to Instagram on 30 July, AKA penned a special message to Benni McCarthy following his stellar appointment at Manchester United. The Fela in Versace rapper said he was speechless.

“The word proud doesn’t do this moment justice. My uncle played for Cape Town Spurs, my father is from the Plein…”

“My hero, my GOAT… This is just unbelievable. From Hanover Park to Old Trafford… Unreal.”

ALSO READ: ‘I’d love to have his babies one day’: Nadia Nakai gushes over AKA

Congratulatory messages from local football fans have been pouring in for Benni McCarthy on Twitter.

“If you saw what he did with Cape Town City and AmaZulu…Then you will know how ambitious Benni McCarthy has always been. Still scoring goals after he retired,” wrote football enthusiast Shakes Rampedi.

“Congratulations, we are represented,” wrote one tweep.

“Benni McCarthy is the greatest South African to ever lace up.”