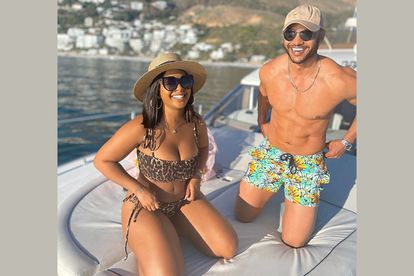 Media personality Boity Thulo appears to have spoiled her rumoured boyfriend actor Anton David Jeftha for his birthday in photos posted to Instagram on Saturday 9 October.

South Africa’s most followed celebrity on Instagram, Boity Thulo recently got into an altercation with radio personality Bujy Bikwa. There have been allegations that Bujy assaulted Boity by throwing a glass at her at the Courtyard Hotel in Midrand. Bujy therefore spent the previous weekend behind bars before he was granted bail of R2000.

While leaked audio clips from the altercation surfaced on social media, Boity seems to be over it and has not yet reacted. Instead, she seems to have spent her time spoiling her “bestie” Anton Jeftha.

Judging from the pair’s Instagram stories they seemed to have spent the day together.

Anton took to his Instagram stories to post videos of his beautiful novelty birthday cake that spelt out his initials. While the media personality posted the same cake on her Instagram story thanking the baker!

Anton jeftha then shared a Reel of a bunch of balloons and his big bold light-up initials.

Boity later shared a picture of the set up on her Instagram story thanking the balloon company.

Boity and Anton were first rumoured to be dating around Valentine’s Day this year when the “Twitter Police” matched the backgrounds of their pictures, concluding they were together. In early August the “Twitter Police” also believed the pair went on another baecation together, in Cape Town.

In September, the pair seemed to have gone “Twitter Official” after Boity retweeted a picture of the Legacy actor which was captioned “her view”.

The pair seem to have taken another Cape Town becation for Anton’s birthday. On Boity’s Instagram stories, she thanked Latitude Cape Town for their stay at the penthouse which was seen in the background of Anton’s video. The video she posted to Instagram had both mountain and beach views!

Here is a look at their “baecation” … or “bestiecation” snaps.