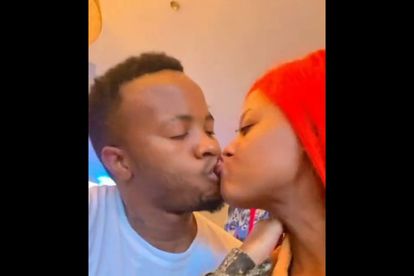 A video of Gqom artist Babes Wodumo kissing another man, who is now her husband, went viral on Twitter on 9 March.

Babes Wodumo is married to musician artist Mandla Maphumulo, popularly known as Mampinsta, but she is seen kissing another man. A viral video shows the Wololo hitmaker seal a kiss with her alleged “male bestie.” Take a look…

A “male bestie” is considered to be a girl’s best friend who she sometimes develops feelings for. So, Tweeps were thinking of her husband Mampinsta and whether this is considered cheating or not.

“Life has taught me that when a man becomes your “friend”, he wants you. If you are an idiot, one day you will wake up naked, next to your ‘bestie’ who will ask you to accompany him to get his girlfriend,” commented @Kapella28604560.

“Can someone please tag Mampintsha? I want to see a flying mpama before the sun goes down,” commented @Zwely10111.

THE QUEEN OF GQOM & MAMPINTSHA

Babes Wodumo and Mampitsha have reportedly been together for 10 years and there is a 12 year age gap between the pair. In October 2020, Mampintsha officially asked the Redemption hitmaker to be his wife and she said yes!

The pair held their traditional wedding in April 2021 in KwaZulu-Natal. Babes Wodumo and Mampintsha then welcomed their first child together in June 2021. The marriage did not come without any drama.

Mampinsta’s mom accused Babes Wodumo of faking her pregnancy by using sponges over her stomach.

“I am pregnant, whether she likes it or not. If she has problems with it, she must deal with it, I am hurt about this. I know most of the things she says when she is drunk should not be taken seriously. But this time she has gone too far. I am going to press charges against her, I want her to clear my name,” she said according to IOL.

The gqom queen and her mother-in-law have since kissed and made up.