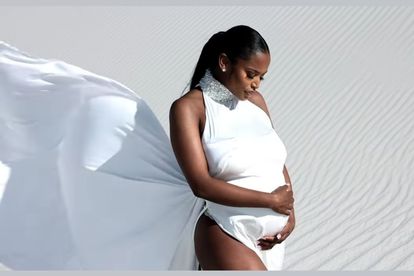 Model and influencer Ayanda Thabethe surprised her 1.9 million followers when she announced her pregnancy on Friday 28 January.

Ayanda Thabethe announced that she and her partner are expecting their first child together. The influencer announced her pregnancy via a beautiful one minute 20 second long video. She is wearing a white dress with flowing trains behind while standing on sand dunes.

Ayanda cradles her baby bump as Frank Ocean’s Godspeed is playing in the background. A man’s hand is then seeing over hers as they both cradle the baby bump. The video racked up close to 200 000 views. Take a look…

“More than my heart can hold. Greater than I deserve. Beyond everything I could ask for. An answer to a secret and nervous prayer,” she wrote.

ALSO READ: R200k gift, but how did Oskido react to the news of DJ Zinhle’s pregnancy?

The model has had many public relationships but she managed to keep her latest relationship under wraps. She was previously married to television presenter Andile Ncube but they got divorced.

Ayanda had tongues wagging in July 2021 when she shared a snap of herself cuddling with her beau. She did not reveal his face but she did share a series of tweets showing that she was taken. Take a look…

“When your partner starts talking in ‘we’ ❤️,” she tweeted.

“Spent the whole weekend indoors with my ❤️ and I’m convinced now more than ever. What a guy ❤️????,” she tweeted.

At this point it is unclear who the father of the baby is but we’ll have to keep an eye out for more posts to follow.