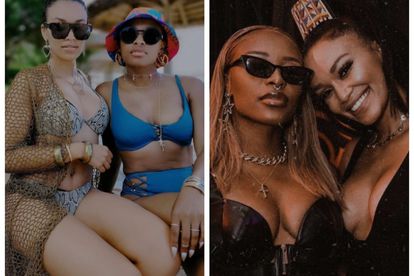 DJ Zinhle has finally hit back at claims she and Pearl Thusi are no longer friends. Image via @djzinhle/Instagram

DJ Zinhle has finally hit back at claims she and Pearl Thusi are no longer friends. Image via @djzinhle/Instagram

Media personalities Pearl Thusi and DJ Zinhle are trending on social media following a clip of the pair at Montana The Club in Rosebank as they celebrated rapper Nomuzi “Moozlie” Mabena’s birthday on Wednesday 21 September.

The short video, which shows DJ Zinhle seemingly giving Pearl Thusi the cold shoulder, has reignited the debate about the two friends’ once intimate and high-publicised friendship.

In the past, the Catching Feelings actress has always taken to social media to rubbish claims that her relationship with the Her Majesty boss has crumbled. The last time the pair were seen together publically was in June when they were booked to perform together at the Rockets Lifestyle club in Bryanston.

When clips of the two besties went viral, tweeps claimed that the Black Rose gin founder was “trying too hard.”

The same sentiments have been echoed by tweeps after the latest clip of the two girl-moms who were booked for their friend Moozlie’s event. Pearl Thusi was the host while DJ Zinhle and her husband Murdah Bongz were the main acts.

In the video, the Umlilo DJ is seen doing what she does best behind the decks when a cheerful Pearl Thusi approaches her. But Zinhle seems to pay Pearl no mind as she immediately talks to the guy standing next to her which forces the actress to go back to the crowd.

But, another tweep posted another video of Pearl, Zinhle and Murdah Bongz jamming behind the decks.

‘WE HAVE AN EVERLASTING SISTERHOOD’

Although DJ Zinhle has not previously taken to social media to address the rumours about her alleged beef with Pearl Thusi, the Indlovu hitmaker did talk about their friendship in an interview with SowetanLIVE’s SMag in August.

“Pearl and I are fine… we have an everlasting sisterhood. Much like every relationship has its ups and downs, we go through that as well. We are at a point in our lives where we don’t have to explain ourselves to people as long as we’re accountable to each other and our friendship,” Zinhle said.