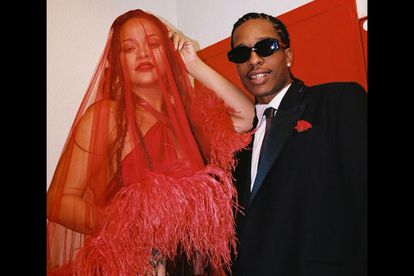 A$AP Rocky proposes to Rihanna and ties the knot in ‘D.M.B’ video. Image via Twitter @FentyCop.

A$AP Rocky proposes to Rihanna and ties the knot in ‘D.M.B’ video. Image via Twitter @FentyCop.

American rapper A$AP Rocky proposed to his “baby mama-to-be” singer and businesswoman Rihanna in the music video of his song D.M.B which was released on YouTube on Thursday 5 May.

Rakim Athelaston Mayers, popularly known as A$AP Rocky, proposed to Rihanna with a grill that reads “Marry Me?” – in the D.M.B music video. Rihanna, who is wearing a red veil responds with “I do” in her grill.

Towards the end of the video a group of people throw petals at the couple. This usually happens when friends and family are congratulating newly weds. Page Six reports that both Rihanna and A$AP Rocky’s reps have not yet confirmed nor denied whether the couple is married in real life.

Rihanna is currently carrying the rapper’s child. So, it would not be surprising if the pair actually do plan on getting married.

The Fashion Killa hitmaker took to Instagram to thank Rihanna for the motivation and role as he made his directorial debut.

“Proud (to) announce my directorial debut D.M.B video out now!!! Thanks (to) all involved who helped & $pecial thank$ (to) my lady for the motivation and role,” he wrote.

Rihanna’s “baby daddy-to-be” threw shade at her ex-boyfriend Chris Brown. This was because Chris Brown’s infamous assault against the Fenty Beauty owner.

“I don’t beat my b*tch, I need my b*tch,” raps A$AP Rocky which fans speculate is an aim at Chris.

Chris assaulted Rihanna back in 2019 and no one has forgotten. Fans also thought it was “shady” that the rapper dropped the song on Chris’s 33rd birthday. Take a look…