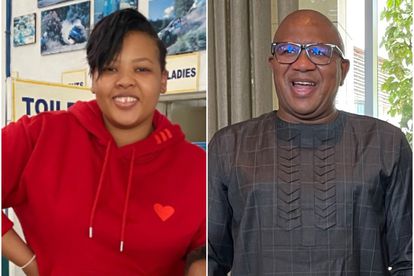 Minister of Transport Fikile Mbalula has faced the wrath of angry tweeps once again, after he was accused of giving “special treatment” to Anele Mdoda.

This, after the 947 radio presenter complained about having to fork out cash for new tyres due to her vehicle hitting a number of potholes on the road.

The minister responded to a tweet posted by the TV and radio star, inviting her to send him a “DM” regarding her road drama.

On Thursday 24 March, Anele took to Twitter to bemoan her car hitting a number of potholes on a main road in Johannesburg.

The incident occurred on the Willem Nicol slipway into Sandton Drive. Anele alleged she had to fork out R12 000 to have her tires fixed.

Tagging Fikile Mbalula, she posted: “Pothole just took out two of my tyres. This is getting annoying I won’t lie”.

She added: “This is annoying because I am paying because someone else didn’t do their job”.

Not long after this, Fikile Mbalula himself responded to Anele’s tweet, posting: “Please send me a DM”.

He also advised her to tag the City of Joburg in another tweet about her experience.

Anele then got a response from the city’s Funzi Ngobeni who instructed Joburg Roads Agency to take immediately on the said road.

Surprisingly – or unsurprisingly – Anele took to Twitter a few hours later to reveal and update that the very potholes she had hit were being mended.

She tweeted: “The spot that took me down is getting fixed as we speak. I ran into a few on my way back from Kyalami and a few along Willem Nicol. Don’t know who to thank? Whomever… thank you”.

Potholes on South African roads are the bane of every driver’s existence. From the damage on your car – and pocket – it causes to the possibility of it causing serious accidents on the roads.

And whilst many celebs like Anele can afford to spend large sums of cash on their car maintenance, the ordinary South African citizen more than often cannot.

Following Anele’s experience, and Fikile Mbalula’s quick action, many tweeps complained about why their concerns were being ignored. Many also brought receipts of proof that the minister had obviously dished out preferential treatment.

“So you only respond to celebrities?”, said one tweep. Another added: “You seem to be selective in your response approach”.

One tweep also found fault with Anele for being on the receiving end of help from Fikile Mbalula.

“And Anele Mdoda also sees nothing wrong with this preferential treatment she’s getting from the minister. We are on our own people. You see!”