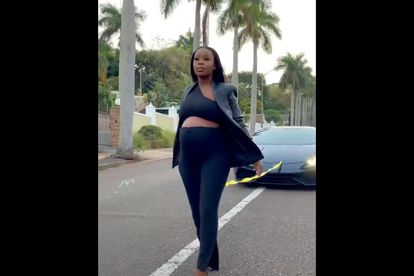 In her latest Instagram Reel, South African influencer Sithelo Shozi is seen pulling a Lamborghini while pregnant with Cardi B’s Up playing in the background. The video which was posted on Wednesday 1 September has gone viral on social media.

In a recent Instagram live session Sithelo Shozi hinted that she married businesswoman Shauwn Mkhize’s 20-year-old son, Andile Mpisane as she referred to herself as “Mrs Mpisane”. Sithelo gave birth to her third bundle of joy on 21 July. This is her second baby with Andile Mpisane.

“You got that right, I mean hello! Yes, I am married, y’all better leave me alone,” she said.

To celebrate her pregnancy, Sithelo took to social media to share her first Instagram Reel that she took while she was pregnant. The video sees the influencer modeling to Cardi B’s hit song Up as she pulls a Lamborghini along with her.

It seems the video was not an original but inspired by someone else’s pregnancy video which had people in the comments section wondering if this was a “push” gift she was showing off.

SITHELO SHOZI DID NOT EXPECT TO GO VIRAL

In an interview with Tshisa Live, the influencer said that she did not expect to get the reaction she did from the Instagram Reel which was posted just for fun.

“I didn’t expect the reaction and reception I got from posting the reel. It was just a short and fun video I’d done two or three months ago during my pregnancy and thought I’d keep for memories, I spontaneously changed my mind and posted it for fun, little did I know it’d cause a bigger stir than I’d anticipated,” said Shozi to Tshisa Live.

She went on to say that juggling being a mom and work is difficult. The working mom is also a singer who has a single out titled Forever which racked up over five million views on YouTube.

“Juggling motherhood and work is very difficult but it’s about working around the time that you have and prioritising your family when you do have the time to spend with them. It’s very important to find a balance and a way that works best for you,” continued Shozi.