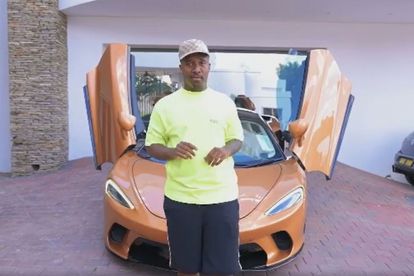 It was Christmas like any other for Andile Mpisane – lots of flashy gifts and plenty of social media boasting.

The only difference was that this year he celebrated his holiday with his new bride Tamia Louw and two daughters Flo and Coco, whose mother is Sithelo Shozi.

The husband and father took to Instagram to reveal his spoils – a brand new McLaren for daddy and a life-size dollhouse for baby Flo.

Andile Mpisane first shared a video of his gold chrome McLaren on Instagram. In it, the Royal AM soccer boss and aspiring rapper dons a Louis Vuitton and Gucci outfit as he steps into the luxury sports car.

Some followers even accused him of firing shots at fellow rapper Cassper Nyovest, who earlier this month also unveiled McLaren as a gift to himself. However according to entertainment personality Nota Baloyi, Cassper’s McLaren is merely a rental.

Andile captioned the clip: “Drinking water & minding my own one & only GOLD McLaren”.

Andile Mpisane then shared a post of his daughter Flo’s amazing life-size dollhouse that would put Stormi Webster’s to shame!

The gift featured an actual miniature house complete with doors and windows. It also boasted a slide, swings and cute balcony for her to play on with her cousins and friends.

It isn’t clear what daughter Coco and wife Tamia received as Christmas gifts.

Meanwhile Shauwn Mkhize shared a video of her loved ones feeding the less fortunate on Christmas day.

The Kwa Mam’Mkhize reality TV star welcomed her extended family into her home for the holidays, which were filled with lots of celebration and plenty of champagne.

On Christmas day, however, the clan – including Andile Mpisane and Tamia – took to a Durban community to hand-deliver meals to the less fortunate. They even squeezed a couple of selfies with star-struck fans!