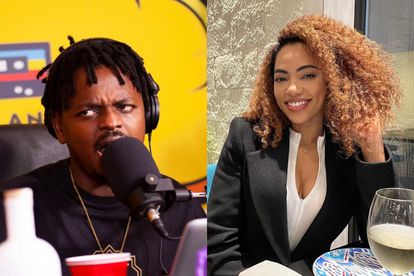 Actress Amanda du Pont served Podcast and Chill host Macygver “MacG” Mukwevho with a legal letter after he requested a “round table meeting” with her and Jub Jub, who she accused of raping her – via an Instagram video on 2 December.

Jub Jub has been trending on Twitter for almost a full week after his interview with MacG on Podcast And Chill. The Uyajola 9/9 host told MacG he “smashed” Amanda. This deeply upset the actress who responded by claiming she was raped and not smashed.

MacG served Amanda with a letter of demand – that claimed her video caused him reputational damage and “influenced a large number of people to now view and label him as a rapist and abuser.” Broadcaster Eusebius Mckaizer thereafter tweeted a letter from Amanda’s lawyers to MacG.

“Our client has done no such things. Any reputational harm your client may have suffered (of which we are not aware) could not only be attributable to your client’s own unacceptable behaviour,” reads part of the letter.

MACG AND JUB JUB SLAMMED FOR USING THE WORD ‘SMASH’

Amanda’s lawyers stated that MacG and Jub Jub used the word “smash” which was degrading.

“During the episode, your client asked Mr Maarohanye whether he had, at some stage, “smashed” our client. As you may know, this word is a degrading reference to a man sexually penitrating a woman’s vagina. Your client’s employment of our client’s name in this context and manner was demeaning and degrading to her, in particular and to women in general,” the letter read.

The letter also revealed that Amanda will not make a public apology to MacG. MacG is then called a “nobody”.

“Our client rejects this request. We are instructed that, to our client, your client is a nobody. She has neither the time nor the inclination to meet him,” continued the letter.

The actress also expressed that she was displeased with the pair using the word “smash” to publicly degrade her.