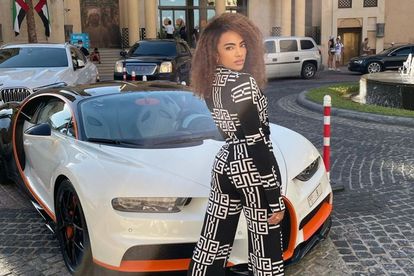 Amanda du Pont poses with a Buggati in Dubai. Image via Instagram @amandadupont.

Amanda du Pont poses with a Buggati in Dubai. Image via Instagram @amandadupont.

Actress Amanda du Pont is unbothered by the Jub Jub drama as she poses with a Bugatti in Dubai on 14 December.

Amanda du Pont’s Instagram has looked more like a travel blog recently because of all the travel content she has been posting. She shared Instagram stories in beautiful places such as Venice, Germany and Turkey. The photos are close in timelines so it is unclear whether she actually visited these places recently or some time ago. The actress may have been in the middle of a scandal in South Africa but she appears to be unfazed by the drama. She posted snaps in front of a Bugatti in Dubai.

“Bugatti Babe,” she captioned the post as she is seen sporting a Fashion Nova bodysuit and Louis Vuitton sandals.

In another picture she is wearing an orange body suit also from Fashion Nova. The location of both pictures is tagged in Dubai so it seems like she did visit the city recently.

ALSO READ: ‘I had an abortion and… he tried to kill me’: Amanda du Pont on Jub Jub

The drama surrounding Amanda is the rape allegations she made against Jub Jub on 2 December. This was after the Uyajola 9/9 host claimed he “smashed” her — on an episode of Podcast and Chill on 1 December.

Amanda was upset at the term Jub Jub used on her because she alleged that she was “raped” and not “smashed.” So, she fired back at the television host via an emotional video.

Jub Jub apologised to Amanda on 6 December and said he will leave the rape allegations in the hands of the court.

“It was inappropriate for me to discuss the details of my relationship with Ms du Pont in public, I deeply regret the incident. I wish to apologise unreservedly to Amanda for the humiliation and hurt I caused her,” wrote Jub Jub on Instagram.

Amanda and Jub Jub are reportedly attempting to settle their cases against each other out of court. There is no further information on their settlement but Mama Jackie also has a case pending against the actress.