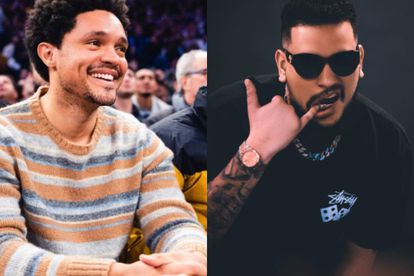 It all started when AKA questioned if South African footballer and a first-team coach at Manchester United Benni McCarthy was considered “black excellence”.

“Quick question … is Benni “Black Excellence” or nah? … just need an update with regards to who takes the W here. Thanks,” he tweeted.

A Tweep then asked about race and questioned if South African-born comedian Trevor Noah is coloured.

“I once saw on SABC news colored parents protesting against a black ( African) principal, they didn’t want a black principal in their school… it’s an interesting question: What is a colored? Is Trevor Noah colored ? Is Lucas Radebe colored? Lucas’s mother is colored,” wrote @bsibisi1.

AKA replied saying that he does not think Trevor is coloured in a South African sense but admitted to being confused.

The Daily Show host published No 1 New York Times bestseller, Born a Crime: Stories from a South African Childhood — his autobiographical take on being born under apartheid law — in 2016.

Trevor wrote about his father Robert Noah, who has Swiss-German ancestry, while his mom, Patricia Nombuyiselo Noah, is a Xhosa woman in the best-selling book.

“Uhm no … Trevor is not Coloured in the South African sense … or is he? I dunno. I’m confused now,” AKA replied to the Tweep.

“This ou should rather stop tweeting,” wrote @robin06legal.

ALSO READ: AKA slams prophet’s death premonition: ‘Not a messenger of God’