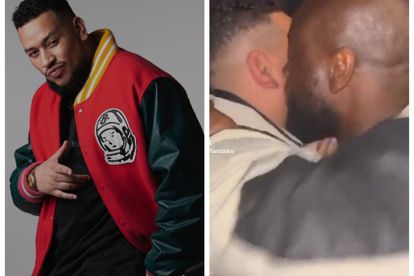 AKA had a rather bizarre encounter with a man who decided to greet him the ‘Italian’ way at an event in Lesotho at the weekend. Images via Twitter @musakhawula, @akaworldwide/Instagram

AKA had a rather bizarre encounter with a man who decided to greet him the ‘Italian’ way at an event in Lesotho at the weekend. Images via Twitter @musakhawula, @akaworldwide/Instagram

The Megacy, rapper AKA’s legion of fans, has applauded him for his funny reaction to a man kissing him at the Spring Jump Off on Saturday 3 September in Lesotho.

The video, which was reportedly shot backstage at the Spring Jump Off, shows the Fela In Versace hitmaker and the man greeting each other with a hug. What follows in a split second is the man leaning in as he tries to kiss AKA on the cheek. But, the rapper quickly moves away and the man’s lips land on his neck.

The muso immediately reacts by pushing the man off politely, but the man claims it was an Italian style of greeting.

The short clip of the encounter had many tweeps in stitches, with some applauding AKA for not attacking the man or exhibiting any signs of anger.

AKA UNIMPRESSED WITH STARSTRUCK FAN

AKA has had some bizarre encounters with fans before and has even gone as far as calling out some of the behaviour.

In May this year, a visibly starstruck fan cried hysterically upon meeting and hugging the rapper. However, the Jika hitmaker was not impressed by this. In a series of tweets posted a few days later, AKA said “falling to your knees and crying your eyes out as a grown man” when meeting him is “a bit over the top”.

“Pull yourself together man,” added the rapper.

“There’s nothing wrong with shedding a young tear or being emotional. But then there’s literally throwing yourself on the ground like I’m Jesus or something. That sh*t is cringe as f*ck.”

“Many famous people have been killed at the hands of their ‘biggest fans,’” tweeted the rapper.