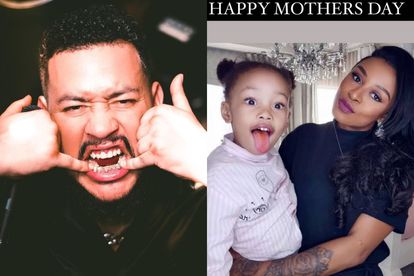 AKA claps back at troll after he posted DJ Zinhle. Images via Instagram @akaworldwide.

AKA claps back at troll after he posted DJ Zinhle. Images via Instagram @akaworldwide.

South African rapper Kiernan Jarryd Forbes, popularly known as AKA, responded to a Tweep who trolled him after he posted a photo of his “baby mama” DJ Zinhle for Mother’s Day on Sunday 8 May.

AKA: ‘IT’S CALLED MATURITY, BEING AN ADULT’

AKA posted a photo of DJ Zinhle and their daughter Kairo in celebration of Mother’s Day on Sunday 8 May. This was alongside photos of the rapper’s mom Lynn Forbes, affectionately known as Glammy.

Tweeps were divided on how they felt about AKA posting his ex-girlfriend on Mother’s Day. This is because some Tweeps thought that it was fitting to post the mother of his child but others were surprised that he posted DJ Zinhle. This is because the Fela in Versace hitmaker is said to be in a relationship with rapper Nadia Nakai.

The rapper clapped back at a troll saying that it is “maturity” and being an adult.

“Those that say they don’t see anything wrong with their boyfriends posting their baby mama’s amaze me, lmao I’d perish 😭😫,” wrote @_Monishi.

AKA and DJ Zinhle welcomed their first child together in 2015. The pair had an on and off relationship until they called it quits in 2020. This was allegedly due to cheating rumours.

The rapper moved on with a then 22-year-old Anele “Nelli” Tembe, who he proposed to and paid lobola for. However, Nelli plunged to her death from the 10th floor of the Pepperclub Hotel in Cape Town on 11 April 2021.

DJ Zinhle then moved on with Black Motion’s Bongani Mohosana, popularly known as Murdah Bongz. The pair welcomed their first child together in September 2021 but this was their second child each. Murdah Bongz has a son from a previous relationship.

AKA was rumoured to have started dating Nadia Nakai in December 2021 and the pair went “Instagram Official” in March. So, DJ Zinhle and AKA have quite the blended family.

AKA’s mom Lynn has the biggest heart and expressed how much she cared for her blended family with a sweet post. Take a look…