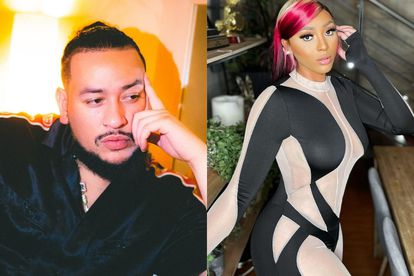 Nadia Nakai and AKA have been rumoured to be dating for some time now. The pair were rumoured to have gone on a “baecation” in December 2021 and were spotted out together in January.

AKA has since dropped a “heart eyes” emojii under Nadia’s post on Instagram which has tongues wagging. Nadia replied with a smile emoji. Take a look…

“I think she is the best fit for him as compared to the other exes,” wrote @mirandalehoke.

“Finally smiled 😃 Fyer a while,,i know it’s not my business but i was getting worried ,where Mega at,, y’all my favorite 🔥😍🙌,” wrote @dgr8zwn.

“I love this,” wrote @zennyjako.

WHAT YOU NEED TO KNOW ABOUT THEIR EXES

AKA revealed he was diagnosed with depression after the death of his former fiancee Anele “Nelli” Tembe. Nelli plunged to her death from the tenth floor of the Pepperclub Hotel in Cape Town.

The Fela in Versace hitmaker was initially a suspect in the case of her death but it was later reported that his interview with eNCA journalist Thembekile Mrototo may have cleared his name in inquiry. AKA posted about Nelli’s death four months after saying the pain never goes away.

“4 months to this day. 💔 … it never goes away. Everyday I pray for her, myself and our families. I will never be the same person I was … but I will do the best I can with the gift and opportunity of life that I still have left. Thank You to everyone who has stuck by me and our respective families … you know who you are. 💜,” the post was captioned.

“I never would have considered a long distance relationship if it wasn’t with him. I can never trust him fully because a man is a man. He’s used to not having a sexual relationship with someone for years because he did that at a time in his life where he needed to,” she said to Silkour.