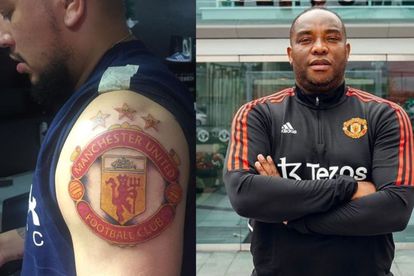 Rapper Kiernan “AKA” Forbes claims to be an avid fan of Benni McCarthy since the former South African soccer great’s coaching days at Cape Town City and AmaZulu. Little wonder then that he was “rapping lyrical” over McCarthy after Manchester United’s 2-1 win over Liverpool on Monday evening. This was McCarthy’s maiden win after his appointment last month to coach the Red Devils’ first team.

‘My hero’: AKA on the ball with praise for Benni McCarthy

The Versace hitmaker comes from a football family, with his uncle having played for Cape Town Spurs. Heading to his social media, AKA relished in McCarthy’s “proud moment” when he was made coach last month:

“The word “proud” doesn’t do this moment justice. My uncle played for Cape Town Spurs, my father is from the Plein…my hero, my GOAT ????… this is just unbelievable. From Hanover Park to Old Trafford…Unreal,” the rapper wrote on his Instagram.

An excited AKA gave blow-by-blow updates and clips of Monday evening’s game on his Twitter timeline with goals from Jadon Sancho and Marcus Rashford sealing the deal for Man United at Old Trafford.

“Maguire was always the problem. ALWAYS!!!”

Clearly not a fan…

Skipper Maguire was benched by Manchester United manager Erik Ten Hag for Monday’s 2-1 win over Liverpool and according to  The Mirror, the player fears he could now be a permanent fixture on the bench.

The publication reports that Maguire could have been told as early as last Thursday that he would not start against Liverpool, with Ten Hag preferring Raphael Varane and Lisandro Martinez in central defence.

‘Friendly match’: AKA vs Cassper on the soccer pitch

Last month, AKA and Cassper — who have made headlines in the past for their so-called “hip-hop beef” — headed to the soccer pitch for a celebrity match.

To the surprise of their fans, the rap rivals both played in Team Hip-Hop at the Celebrity Soccer Games which took place on 24 July at the Wits Soccer Stadium, in Johannesburg.

Team Hip-Hop, which also featured Kwesta, Sjava and Tbo Touch, was captained by Big Zulu. The hip-hop squad faced off against Team Gqom with the likes of Mampintsha, Naakmusiq, DJ Cleo and Andile Mpisane showing off their soccer skills.

Cassper scored one of the three goals which clinched the deal for Team Hip-Hop with a final score of 3-2.

WATCH: That high-five between AKA and Cassper…