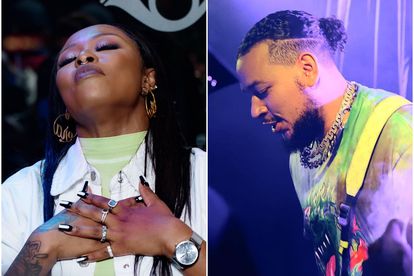 Their relationship has been fraught with extreme highs and lows…but now it looks like AKA and his ex DJ Zinhle are finally on civil terms, if not friends.

The former lovers, and parents of six-year-old Kairo Forbes, publicly reunited this weekend for a joint gig at the rapper’s Super Soft Sunday party in Germiston.

And the pair put on a united front, despite their differences and dating history…

AKA HYPES UP DJ ZINHLE

In videos circulating on social media, AKA is captured hyping up his baby mama as she performs on the decks at the Huula Beach Club to a bustling crowd.

Zinhle is seen wearing a white jumpsuit and thigh-high snakeskin boots as she entertained the crowd with her music mix and dance moves.

Zinhle and AKA’s new friendship – or at the very least working relationship – has attracted many comments online, including those that the latter is trying to “sabotage” his ex’s new relationship.

Some have praised Zinhle — who is dating baby daddy Bongani Mohosana aka Murdah Bongz — for being “mature”.

One tweep posted: “They are in a good space and parenting well, I’m happy for them. I also think it’s because Zinhle has always been mature about everything and always sought peace even when she was hurt over and over again”.

Others are convinced that the rapper has an agenda.

Another tweep added: “Truthfully & respectfully speaking AKA would never do this if his fiancée was still alive. Cause he was throwing jabs at Zinhle a lot & saying things like ‘get yourself a lekker 21-year-old then you’ll be happy’ etc. That’s the truth and you know it.”

A third tweep even went as far as to claim AKA wants to rekindle his romance with his ex.

“Whatever you say, stay away,” posted another tweep.

And then there were those who insinuated that there was more to the story.

“While Murda Bongz will be out in Gaborone, Botswana for a gig today, his current girlfriend & baby mama, DJ Zinhle will be hanging out with her ex boyfriend & first baby daddy, AKA!” one fan tweeted.

Everything okay between Zinhle and Murdah Bongz?

Another claimed that all was not well with Zinhle’s new relationship from scenes of her reality TV show The Unexpected.

The fan tweeted: “Zinhle doesn’t love Bongani, so much resistance to marrying him is worrying. Every episode she has to talk about that which is very worrying. She is never getting over AKA #TheUnexpected”