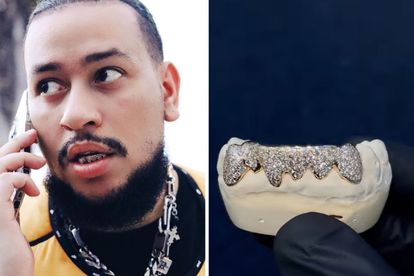 The South African rapper Kiernan Jarryd Forbes, popularly known by his stage name AKA, has gifted himself a flashy set of diamond-encrusted grills believed to be worth a whopping R75 000.

A quick flash of a mouth full of diamonds will surely make a statement!

It is also stated that the jewellery industry is dominated by people who are “flexing” that they have flawless diamond grills; when in reality their jewellery and grills are made using man-made lab-grown diamonds, or Cubic Zirconia stones.

Nevertheless, the rapper – who had a very emotional 2021 after losing his fiancée Nelli Tembe – showed off his new pair of grills on his Instagram Stories, according to SA Hip-Hop magazine.

It seems that AKA actually responded to a comment on a short video clip from GSM Custom Grillz flaunting the expensive looking set of grill.

Some Twitter users were quick to demand that he shows proof of purchase:

“Since we want proof when other artists buy McLaren’s. We also want proof of those grills. If he doesn’t show us proof then they are plastic grills…” said @Predator_rsa.

“The most useless piece of nothing, ever,” said @JuniorProtus.

Others were quite impressed.

AKA opens up about his health

The Fela In Versace hitmaker has been active on Instagram since the end of 2021, saying that he was diagnosed with depression “months ago”.

“I need to let this be known, especially for so many people out there fighting every day. I was diagnosed with clinical depression many, many months ago,” he wrote.

The rapper revealed that though he was prescribed medication for his condition, but he couldn’t handle the medication he was put on.

“I was put on meds but couldn’t handle them. They made me feel like I couldn’t feel anything so I got off them. Plus my whole job is to feel.”