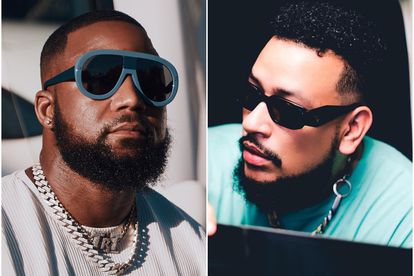 After years of feuding, and months of teasing a boxing match, it looks like we may be finally seeing Cassper Nyovest and AKA face-off in the ring

The rap industry rivals have reignited their feud, and have even challenged each other to put their Twitter trash talk into action.

This follows AKA and Cassper’s bitter ownership struggle over SABC TV show The Braai Show, of which the former was legally declared the co-owner.

AKA REMINDS CASSPER WHY HE BACKED OUT OFBOXING MATCH

The drama kicked off over the weekend when Cassper revisited the opportunity of fighting AKA in a boxing match. In 2020, the rappers had a back and forth about a prospective fight between them. However nothing materialised after much hype.

After responding to a tweep who asked if he would ever fight his nemesis, Cassper tweeted: “He doesn’t have the balls to come see me in the ring. Plain and simple. I would love to give him a hiding!”.

AKA caught wind of his rival’s tweet and reminded him of a tweet he posted in October 2021, in which Cassper claimed his own father had “talked him out of” the celebrity boxing match. This after alluding to AKA’s personal tragedy – the death of fiancé Nelli Tembe.

Cassper’s tweet read: “When I really wanted to fight Aka he kept running & making excuses. Then the unfortunate happened & it’s just not a good look to fight him now. My dad called me and asked me to let that one go, for him. It’s not the same”.

IS THE FIGHT BACK ON?

Despite Cassper backing out of the match last year, it looks as if he is ready to reconsider his decision in 2022.

Tagging AKA, he tweeted: “I didn’t wanna fight you cause I felt sorry for you. Seems like you’re the same piece of s**t and I’m bored of the back and forths with you. Do you want to get in the ring or not? Give me a date. You wouldn’t get past the first round. When do you wanna do it?”

Cass took it a step further by offering to fight AKA after his match with Naakmusiq next month in Sun City.

He posted in a separate tweet: “You wanna be a hooligan all your life brother? We grown now! The back and forths are boring. Let’s get a date. I would even fight you right after I drop Naak at Sun City, you can jump in right there and get a free ass whopping.  Let’s go ! Stop talking! Act!”.

AKA has yet to respond to the offer.