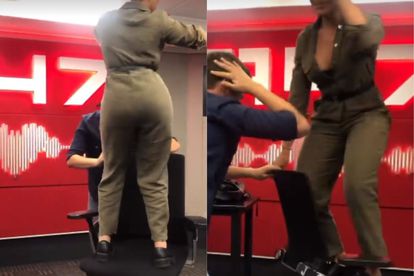 #947DriveWithThando joins #UmlandoChallenge in support of Dineo Ranaka who was suspended at Metro FM. Image via Twitter @947

#947DriveWithThando joins #UmlandoChallenge in support of Dineo Ranaka who was suspended at Metro FM. Image via Twitter @947

947 drive with Thando Thabethe has shown solidarity and support for suspended Metro FM DJ Dineo Ranaka by doing the #UmlandoChallenge in the studio.

Thando and her team were also throwing shade at Metro FM by doing the challenge while standing on furniture.

Radio personality Thando Thabethe and her drive time team at 947 have shown support for Dineo Ranaka who was reportedly suspended at Metro FM for misconduct.

Ranaka filmed herself dancing on top of office furniture at the SABC studios while doing the Umlando Challenge.

Listeners at 947 applauded Thando Thabethe and Alex Craig from the drive time show for participating in the Umlando Challenge in the 947 studios.

The actress and the station shared the video of her doing the challenge on social media.

Thabethe also shared the video on her Instagram story and captioned the video:

“In allegiance with my love @DineoRanaka”.

A source informed City Press that producer and radio personality Dineo Ranaka – got suspended from Metro FM for misconduct following her participation in the #UmlandoChallenge.

Ranaka did the challenge by dancing on top of expensive furniture at the radio station.

“The SABC can confirm that Dineo Ranaka is not scheduled on Metro FM at this stage and as a matter of principle the corporation does not discuss matters relating to its independent contractors in public.”

Ranaka who usually presents The Bridge on weekdays, 9:00 and 12:00 was temporarily replaced by her colleague Marian Nyako-Lartey.

“She did it with the wrong radio station that one their red card is always on the hand, not pockets.”

“She should have asked a White colleague to show her, abelungu bane laka.”

“Instead of tweeting in support of Dineo they just decided to show Metro that dancing on furniture is not a big deal, I like this.”

“This is done in solidarity with Dineo, not to spite him. It’s a message to Metro FM that what they did was a poes move.”

“In support of Dineo, the whole Metro crew must do this. It’s the only way the station will feel the pressure.”

Also read: Why are Nomzamo Mbatha, Thando Thabethe and other celebs in Dubai?