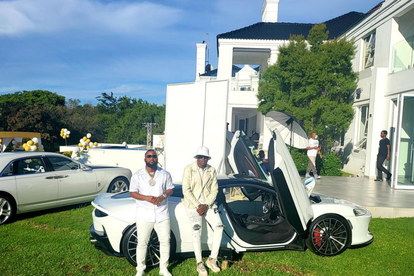 Cassper Nyovest is having one helluva Dezemba. Not only is he spoiling himself for his birthday with a brand new toy – a R3 million McLaren – but he has also launched his new alcohol beverage Billiato.

The hitmaker even threw a star-studded party to to celebrate the occasions.

Cassper Nyovest – who turned 31 on Thursday 16 December – celebrated “Billiato day” with an opulent bash at his home.

The party included a white and gold set-up that boasted white tents near the pool, an enviable display of his sports cars and a never-ending supply of flowing drinks.

Black Coffee was recruited to spin the decks and had the crowd on their feet.

And of course, the bar was fully stocked with Billiato!

According to Cassper’s Instagram Stories, Billiato – a spirit aperitif – sold out in stores shortly after it’s launch. Cassper told his fans that he “underestimated the demand” of the product ahead of its launch.

WHERE IS BABY MAMA BEX?

But despite Cassper taking multiple wins these past few days, fans did notice that his girlfriend and baby mama Thobeka Majozi was not at his birthday party.

In fact, fans even claim that the social media influencer who shares son Khutso with Cass, did not even publicly wish him a happy birthday.

Could there be trouble in paradise?