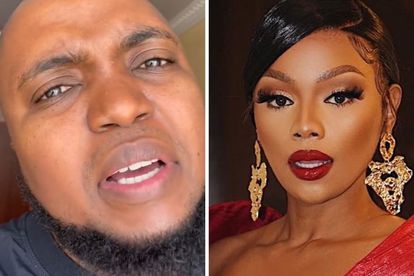 Whilst Bonang Matheba has a legion of adoring male fans, none have been as bold to publicly shoot their shot with the media mogul and businesswoman…

This week a super-cringe clip of a man asking Bonang out on a date. The clip was shot by content creator “JSindy”.

And the video proved to be pure entertainment as the man swoons and croons over Bonang – against the soundtrack of a Luther Vandross love song!

Channeling his inner Wilson B Nkosi, JSing tells Bonang that he’s the “perfect” man for her.

He says: “My name is JSindy, but you can call me King J.

“I’ve made up my mind, it’s you that I want. It’s always been you. I’m tired. I’m no longer settling for less.

“We would be couple goals, we could be ‘love lives here’. You’d be very lucky to have me. I’m the best of the best. You and I were made for each other, we compliment each other”.

The man hilariously adds to Bonang: “I don’t have money, but I love you.

“Please don’t play hard to get with me…I’m available for you. Take me now before it’s too late”.

And to the man’s surprise, Bonang caught wind of his proposition – and responded!

After tweeps begged for the star, nicknamed Queen B, to give “King J” a chance, she tweeted: “All the pressure”.

It’s unclear if Bonang is dating anyone after recently being linked to Major League DJ Banele.