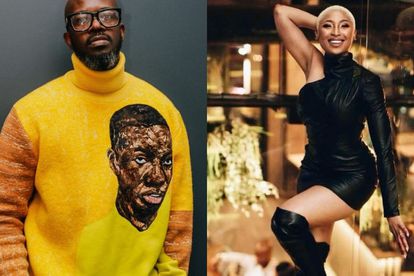 It seems Nkosinathi Maphumulo, popularly known by his stage name DJ Black Coffee, and actress Enhle Mbali cannot even be in the same room together for their son’s birthday.

On 24 June, the couple who is going through a bitter divorce battle, celebrated their son’s sixth birthday with two seperate parties held for the youngster.

Well, at least their son Asante Maphumulo scored as he got spoiled twice for his birthday this year!

The Rockville actress hosted an intimate Super Mario-themed birthday party for her son, taking to social media to share the pictures with her two million followers.

Black Coffee and ‘Sonic the Hedgehog’

While Black Coffee had a Sonic the Hedgehog themed celebration for Asante, also taking to Instagram to share pictures with his three million followers.

There have been reports of social media users feeling like the couple may be overcompensating for their divorce by spoiling their children twice while others seem to feel like the former couple not being able to come together for one party was evidence that the pair are not on good terms, even when it comes to their children.

WHERE DOES BLACK COFFEE AND ENHLE MBALI STAND?

The couple reportedly divorced because of infidelity claims, Black Coffee has allegedly fathered two other children outside his marriage.

Since the divorce, Enhle Mbali has opened up about domestic abuse claims. The former couple have also taken their domestic issues public as Enhle Mbali posted that their electricity bill was not paid on Instagram and Black Coffee took to Twitter to call her out for it.

With the way the divorce has been going, it is no surprise that the pair were unable to come together for their son’s birthday.

Enhle Mbali recently opened up about how she has been honest with her two sons about her marriage to their father Black Coffee because she does not want them to blame themselves for the divorce.

This possibly includes telling her children about the protection order she applied for against their father following claims of domestic abuse. Although the protection order was denied, the actress said she will no longer be protecting Black Coffee and went on to mention that she will bring “all the receipts” in a press conference. The press conference has not yet taken place.

“He called my children telling them to stop the case. My child was crying, telling me that he no longer feels like a child anymore because of ‘the voice’ and because he has new siblings and so many other things,” said Mbali in a video posted to her Instagram.