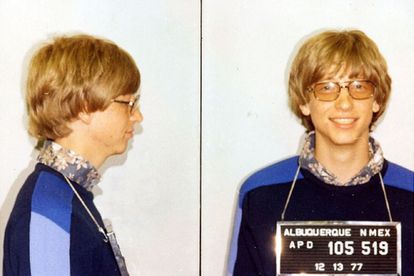 A mug shot of Bill Gates following his arrest way back in 1977 in Albuquerque, New Mexico. Image via Twitter @classicpix

A mug shot of Bill Gates following his arrest way back in 1977 in Albuquerque, New Mexico. Image via Twitter @classicpix

It seems billionaire and Microsoft founder Bill Gates had a few minor run-ins with the law in his 20s. A mug shot of the 66-year-old businessman following his arrest in 1977 is widely available on the internet.

ALSO READ: ‘If I die under mysterious circumstances’: Is Elon Musk’s life under threat?

WHY WAS BILL GATES ARRESTED?

A 2007 article by Time Magazine reports on the picture in question. According to the article, the mug shot was taken in 1977. Gates was all of 22 years old at the time and it is reportedly the same year that he would have graduated from Harvard University if he hadn’t dropped out.

The business magnate has given an account of his arrest before, according to the article.

“I was out driving Paul [Allen]’s car… They pulled me over, and I didn’t have my license, and they put me in with all the drunks all night long. And that’s why the rest of my life, I’ve always tried to have a fair amount of cash with me. I like the idea of being able to bail myself out.”

Snope also did a fact check and found that he was arrested in Albuquerque, New Mexico. The outlet also reported that Gates had been arrested in 1975 for speeding and driving without a license.

In 2010 it was believed that the generic profile picture on Outlook in its People Pane feature (a panel that showed recent e-mail and other information from a contact) was a silhouette of Gates’ 1977 mug shot.

According to Ars, the silhouette used in People Pane matched the mug shot photo perfectly.

However, no confirmation from Microsoft has ever been offered on this. Since then, Microsoft switched to other generic photos for its apps, so Outlook 2010 was the only version that allegedly featured Gates’ mug shot. The People Pane feature was discontinued in 2020.