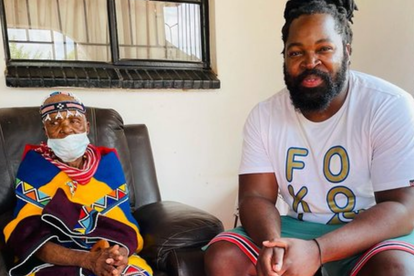 Big Zulu during his visit with Dr Esther Mahlangu. Image via Instagram: @bigzulu_sa

Big Zulu during his visit with Dr Esther Mahlangu. Image via Instagram: @bigzulu_sa

On Saturday 19 March, world-renowned Ndebele artist Dr Esther Mahlangu was tied up, punched, and robbed by an intruder who came into her home while she took a nap. The incident sent shockwaves across South Africa as many expressed their concerns. One of those people is local rapper Big Zulu who decided to pay Gogo Esther a visit shortly after the incident occurred.

Unfortunately, his gesture was badly received by South Africans who have accused him of constantly “looking for clout”.

This sentiment has since been met with agreement by many South Africans who have criticised the rapper for his visit to Dr Esther Mahlangu after she was robbed and attacked by an intruder earlier this month.

Taking to Instagram, Big Zulu – real name Siyabonga Nene – shared photos of himself with the widely recognised artist which he captioned using iSiZulu:

“It was a great joy and blessing to finally arrive at the courtyard of my grandmother Esther Mahlangu’s house.”

He also shared that Gogo Esther, who is well known for her paintings and Ndebele artwork, painted a pair of his Nike sneakers for him.

Fans are not impressed

The post sparked a number of angry comments from social media users who accused the 34-year-old of trying to get some clout using the 87-year-old gogo.

“Using an old person who has been violated for internet fodder.”