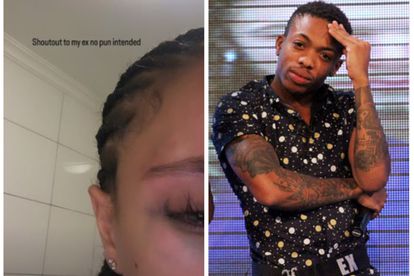 The model revealed “evidence” of the assault on her Instagram Stories.

Ex was a contestant on the reality TV show Big Brother Mzansi in 2015. He is also a rapper.

In the pic, Bianca revealed a bruised, blue eye, allegedly from Ex. “Shout out to my Ex no pun intended”, she wrote in the caption.

In another IG Story, Bianca revealed a screenshot, allegedly from Ex apologising for his actions. It read: “I’m truly sorry about everything from the bottom of my heart. Loving you and caring for you shouldn’t result in this. I take full accountability for all my actions.

“Let me know if I’m able to take you to get checked up and to check up on you”.

Bianca captioned the screenshot “the apology”. In another Story, she wrote: “Ex Global, you’re a pig”

Ex has remained mum on the allegations. He last posted on Instagram in 2020.

WHAT IS THE BIG BROTHER MZANSI STAR UP TO NOW?

Ex – who partnered with Lebo – for the “Double Trouble” edition of Big Brother Mzansi, has continued his tenure of rap music.

Since his exit in 2015, Ex Global has released several tracks and a full-length album I Get Better With Time in 2019.

Ex and Lebo were the first couple to exit Big Brother Mzansi after being offered R100 000 to quit.

Other stars to gain prominence from the reality show from season two were Blue Mbombo, and Mbali Nkosi who are both in the entertainment industry.