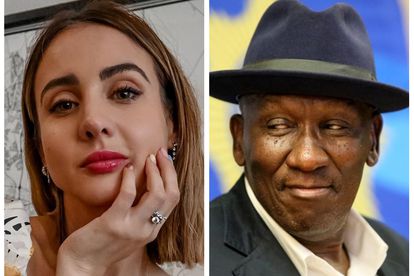 Actress Simone Nortmann is calling on South Africans to sign a petition to remove Minister of Police Bheki Cele from cabinet.
Image via Instagram @simonenortmann/Twitter

Actress Simone Nortmann is calling on South Africans to sign a petition to remove Minister of Police Bheki Cele from cabinet.
Image via Instagram @simonenortmann/Twitter

More and more South Africans are bemoaning the lack of accountability from Minister of Police Bheki Cele…and award-winning actress Simone Nortmann is one of them.

Now South Africans – and particularly Cameron’s civil rights organisation Action Society – are petitioning for Bheki Cele to be removed from his ministerial post.

Taking to her Instagram account, Vir die Voëls actress Simone Nortmann called on the public to sign a petition to have Bheki Cele removed from cabinet.

The Miss SA Top 30 judge shared: “I’m not always fond of talking about politics. But it truly is time to hold corrupt and incompetent politicians accountable”.

On her Instagram Stories, the former 7de Laan star revealed that she was “hopeful” for change. She also believed that the ruling party would lose the 2024 presidential elections.

She shared: “The party that can put petty politics aside and unites a nation through dirtying their hands with service is the party that will govern SA in the time to come”.

Simone Nortmann is not the only celebrity who has been speaking out against Bheki Cele.

Radio personality Sol Phenduka tweeted in defence of Ian Cameron: “This man is speaking sense and telling the truth”.

Fashion designer Thula Sindi added of Bheki Cele: “He’ll get back into his chauffeur-driven Mercedes and go back to his secure suburban complex and leave them in the same circumstances to be murdered and brutalised”.

Actor and media personality likened Bheki Cele to a corrupt movie character from the movie A Few Good Men.