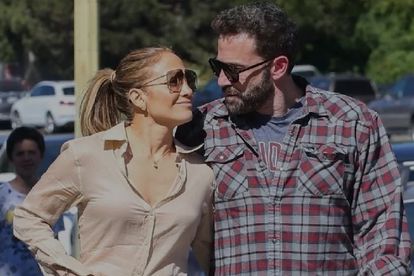 J-Lo has sparked engagement rumours after she was spotted wearing a huge diamond ring. Image via @bendos_everyday/Instagram

J-Lo has sparked engagement rumours after she was spotted wearing a huge diamond ring. Image via @bendos_everyday/Instagram

It seems there might be wedding bells ringing for American couple Ben Affleck and Jennifer Lopez and the pair might actually walk down the aisle this time.

The 52-year-old actress and singer was spotted wearing a massive diamond sparkler on her left ring finger while shopping for some furniture.

According to Daily Mail, the If You Had My Love singer was out shopping with her 14-year-old daughter Emme earlier this week when her huge rock sparkled. However, J-Lo reportedly tried to hide it when she turned the ring around while walking out of the furniture store.

Ben and Jen are definitely in a serious relationship and they are not taking things slow.

The Hollywood couple became Instagram official in July 2021, cementing their love for each other for their fans to see.

Last month it was reported that they bought a $50 million (R735 million) mansion together.

The house is reportedly a 20,000 square foot estate and is located in the luxurious Bel-Air area of Los Angeles. The home has 10 bedrooms and 17 bathrooms. It has multiple kitchens, a theatre, gym, his and hers bath, and a pool.

With their big blended family, their mansion is the perfect size.

The Batman actor shares daughters Violet (16) and Seraphina (13) as well as 10-year-old son Samuel with ex-wife and actress Jennifer Garner.

Meanwhile, it has also been revealed that Ben’s younger brother Casey, is not a fan of the couple as he believes their relationship is “superficial”.

“He finds them superficial. Ben and J-Lo are at the centre of the whole L.A. social scene, which Casey finds frivolous and has really divorced himself from,” a source revealed.