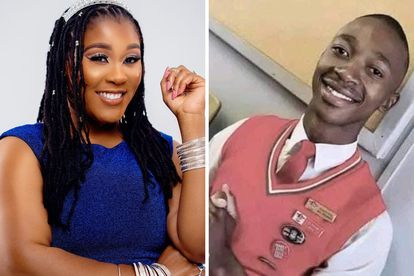 Lady Zamar has reacted to the news of student Bafana Sithole who killed himself over allegations of rape.
Images via Twitter
@lady_zamar

Lady Zamar has reacted to the news of student Bafana Sithole who killed himself over allegations of rape.
Images via Twitter
@lady_zamar

The grade 11 learner – who was accused of raping a fellow student – penned an emotional letter to his mother denying the act.

Lady Zamar accused her ex-boyfriend Sjava of raping her in 2017 after they performed in a concert together. However, the charges against the male entertainer were dropped in 2020 after the National Prosecuting Authority (NPA) claimed that there was “no concrete evidence” to suggest the act had occurred.

Sjava has repeatedly denied the allegations.

Over the weekend, the tragic news of Bafana Sithole’s death became a trending topic online.

The Kriel Hoërskool student from Emalahleni, Mpumalanga reportedly hun himself last Thursday following a year-end exam at school. According to a suicide note written for his mother, Sithole took his life after he claims he was falsely accused of rape.

The note read: “Mama I hope this letter finds you.

“By the time you are reading this, I’ll already be gone. Let me love you and leave you.

He added: “I’ve suffered in this world all alone….My problems are now solved in a long, peaceful sleep”.

To the girl who allegedly accused him of rape, the 17-year-old shared: “May the good God not sympathise with her. May my soul cause a cloud of curse upon her life.

“I’m now leaving her in the darkest world and her sky will turn grey”.

According to Mpumalanga education spokesperson Gerald Sambo, the department had sent officials to the school to investigate the incident and offer support to students in mourning.

ALSO READ: ‘You lied about rape’: Lady Zamar slammed for tweet about men

For many Twitter users, Bafana Sithole’s death brought back memories of Lady Zamar’s allegations against Sjava.

The couple dated secretly for a year prior to the alleged rape incident being made public. However, in a Twitter thread in 2019, the singer claims that the romance was fraught with sexual and emotional abuse.

Sjava maintained his innocence throughout the lengthy ordeal, which was thrown out of court in 2020 by the NPA.

Here’s what tweeps who trolled Lady Zamar had to say:

@LLunga18: “Sjava could have killed himself too because of attention-seeking Lady Zamar. Many men are ended their lives others are in jail because of false rape accusations”

@VanDerMohammed: “If Lady Zamar was punished for her crimes and not treated with impunity, Bafana Sithole would still be alive because his false accuser would’ve thought twice before lying”

@FsTebza: “What happened to Amanda Du Pont and Lady Zamar’s rape cases? What punishment do people get after lying about rape? Why do these fake feminists jump to hearing one side and destroy innocent men?”

Others defended the award-winning singer…

@NalediSekoto: “Why is Lady Zamar being dragged? And at which point did she ever admit to making false accusations against her alleged abuser?”

@SimnikithembaM: “It still puzzle’s me how you guys concluded that Lady Zamar lied about being raped by Sjava yet even the court itself didn’t say so. Insufficient evidence/ no evidence does not mean it didn’t happen”

Meanwhile, Lady Zamar herself reacted to the death of Bafana Sithole and the backlash she found herself in.

She tweeted on Sunday 20 November: “I keep getting tagging on this.. it’s terrible reading such. No one should ever lie about getting raped. RIP to the young man Bafana Sithole”.