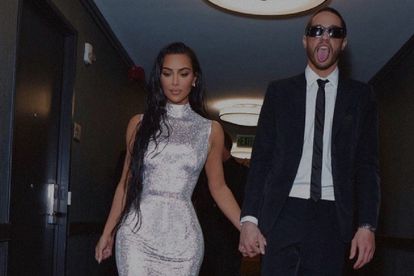 Kim Kardashian and Pete Davidson are ready to start their blended family, according to a source. Image via @kardashian_jenners_blog/Instagram

Kim Kardashian and Pete Davidson are ready to start their blended family, according to a source. Image via @kardashian_jenners_blog/Instagram

Kim Kardashian and Pete Davidson may be only dating for seven months, but the celeb couple is reportedly ready for a blended family.

The 41-year-old reality TV star and businesswoman, who has four children with estranged husband Kanye West, is looking to have a fifth with her 28-year-old beau.

MOVING IN AND STARTING A FAMILY

According to Closer Magazine, Kim is smitten with her man and a source has claimed she’s ready to move in with him and start a family together.

“Kim and Pete have become very serious and while things started out as a bit of fun, they’ve fallen madly in love and are naturally starting to talk about taking the next step in their relationship – which for Pete is to have a child of his own,” said the source.

The Mirror also reported that according to an insider, Pete was more than happy when the SKIMS founder suggested moving in together.

“While Pete still has to fly back and forth to New York for work, she can’t wait to live together full time and start planning their future together, which they hope will include ‘mini-mes’ in the not-too-distant-future.”

KIM HAS HAD A CHANGE OF HEART

Closer Magazine also reported that it has been Pete’s dream to have kids. The Saturday Night live host was just seven years old when his father, Scott – a New York firefighter – tragically died during the 9/11 terrorist attacks.

The source revealed that although Kim was against having more children, she’s had a change of heart since falling in love all over again.

“While she swore off having any more kids following her split from Kanye, being with Pete has forced her to have a change of heart. Falling deeply in love again has made her want to experience having another baby – and the opportunity to create a blended family together.”