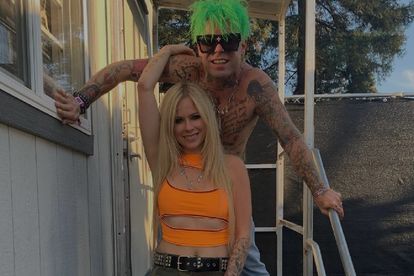 Avril Lavigne is set to marry for the third time as she announces engagement with sweet snaps on Instagram. Image via @avrillavigne/Instagram

Avril Lavigne is set to marry for the third time as she announces engagement with sweet snaps on Instagram. Image via @avrillavigne/Instagram

Wedding bells are ringing for Canadian musician Avril Lavigne after her boyfriend Derek Ryan Smith (popularly known as Mod Sun) proposed to her.

The 37-year-old pop-rock singer shared the exciting news of her engagement to her 35-year-old partner with her 10.7 million followers on Instagram.

The Karma singer had proposed to Lavigne during a getaway to the city of love, Paris, in France.

According to The Mirror, Mod Sun also confirmed the joyous news on Thursday (April 7), after Lavigne was seen with a glitzy rock on her wedding finger earlier on in the week.

In a sweet message on Instagram, he wrote: “The day we met I knew you were the one. Together forever till our days are done. I had a dream where I proposed in Paris. I pulled out a ring + asked you to wear it. I was on one knee as I looked into your eyes. You’re too beautiful for my words to describe. I grabbed your hand + took one last breath… I said ‘will you marry me?’ + she said ‘yes’.”

He concluded by telling her he loves her.

The newly engaged couple has been together since 2021.

In 2018, Mod Sun was in a polyamorous relationship with Tana Mongeau and actress Bella Thorne.

When the relationship did not work, Mongue was kicked out. The Stay Away singer and Thorne began a monogamous relationship together. They became engaged, got married and then divorced in a space of 15 months.

Soon after in 2020, the musician rekindled his romance with Mongue, but it didn’t last long.

Lavigne, on the other hand, has been married and divorced on two separate occasions – to teen pal Deryck Whibley and Nickelback frontman Chad Kroeger.